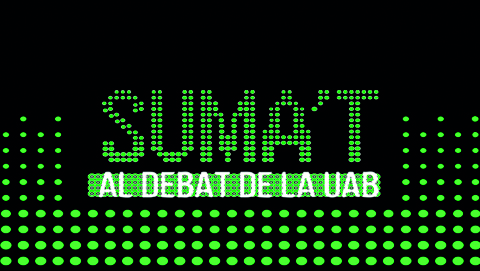 Contest Rules. 2020 Edition.
UAB’s University Debate League aims to encourage  among students the use of words through a dialectical confrontation in which each team has to defend a position on a hot topic.

Participants
Participation in this competition is open to everyone studying in UAB who is enrolled in the current academic year of 2019/2020.

The competition will be carried out in teams, formed by a minimum of two students and a maximum of five. The participation of women must be guaranteed, so the composition of the teams must be at least equal.

You can also register individually, but in this case your participation in the competition will depend on whether the organizers can find a team for you or not. In case of the latter, competing individually will not be possible.

Each student can only be part of one team.

Each team will have to choose a representative who will be the team captain and the interlocutor with the head of judges and the organization of the competition.

Registration
Students interested in taking part must fill in the application form. Application period will end on 25 March 2020. Registration is individual and thus, all members from the team must fill it in. You also have to indicate the teamb memebers and who will be the representative of the team.

Academic Recognition
Undergraduate students taking part in the competition can recognise their participation in the University Debate league with 2 ECTS credits.

To obtain academic recognition, you must:
- Indicate it at the time of registration and make the payment of 25€ at the latest on 30 March. Payment is made by card at the administrative coordination of the Àgora building from 14 h to 20 h.
- To participate actively in all the debates that correspond to the own team (between 2 and 5 debates according to the phases).
- Attend the training session that will take place on 30 March from 13 am to 3 pm.
- Follow up on at least 5 whole debates, in each case filling in the scheme of the structure of the debate (it will be explained in the training session) and publish on social networks references to the debates that have been followed up.

Competition procedure
The competition will consist of at least two debates between the teams participating.

The system will depend on the number of teams registered and will be specified in the Regulations for the 12th UAB University Debate League 2020 Edition, which will be forwarded to each team’s representative once registration period is over for them to prepare their participation accordingly; this will also be worked on in the workshops prior to the competition on 30 March from 1 pm to 3 pm.

You can check Dinamització Comunitària’s Youtube channel, where you will find videos from past editions that may help you in organizing your speech.

Language
Catalan will be the lingua franca for debating.

Dates
The Debate League will take place from 1 to 3 April* in Sala Teatre de la UAB, in Àgora building (Plaça Cívica). Timetable of the competition will depend on the number of teams registered.

Topic
The debate’s topic will be: “Limiting people’s geographic mobility is a proportionate measure to reverse the climate emergency?”

Winners
The team who wins will represent UAB in the University Debate League organized by Xarxa Vives d’Universitats from 27 to 30 April 2020 in Universitat Rovira i Virgili (Tarragona).  On this occasion, the topic will be: “The current educational system guarantees the advancement of people?”

The organization will evaluate the participation of the teams registered in the 2020 edition in other inter-university competitions as representatives of the UAB.

The organization reserves the right to make the team that participates in inter-university competitions bigger with members from other teams that participated in the 2020 edition.

The Debate League beyond UAB
You can follow the debates minute by minute on Twitter @sumataldebatUAB, at the end of the day with the summaries on the blog Suma’t al Debat of the UAB and the funniest part on the Instagram stories @comunitatuab.

Follow us, tag us on the social networks and join the UAB debate!

* These dates are subject to change depending on how the activity in the UAB resumes after the suspension of teaching activity established from 13 March 2020.