Felliniana, towards the centenary of the master

Felliniana, towards the centenary of the master
From October 28th of 2019 to January 20th of 2020
Organized by: Faculty of Communication Studies
Monday 28 October, at 14.15 h
The White Sheik (Lo Sceicco Bianco, 1952), by Federico Fellini 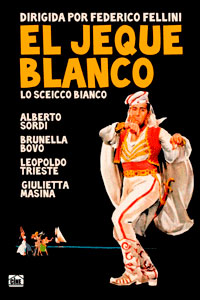 Two young newlyweds from a provincial town, Wanda (Brunella Bovo) and Ivan Cavalli (Leopoldo Trieste), arrive in Rome for their honeymoon. Wanda is obsessed with the "White Sheik" (Alberto Sordi), the hero of a soap opera photo strip and sneaks off to find him, leaving her conventional, petit bourgeois husband in hysterics as he tries to hide his wife's disappearance from his strait-laced relatives who are waiting to go with them to visit the Pope. 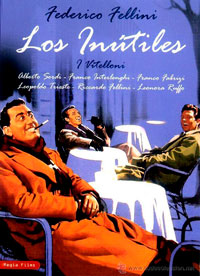 Five adolescent loafers in the Adriatic city of Romini postpone adulthood by idling in their home town. Fellini's elegy to the passage of youth reveals true insights through the characters of the likeable boys, one of whom depends on his sister while another is a careless Lothario. 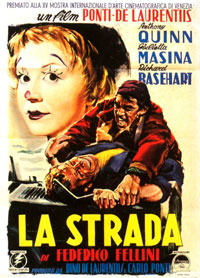 Gelsomina (Giulietta Masina) is sold by her very poor mother to Zampanò (Anthony Quinn), an itinerant strongman. She follows him on the road ("la strada") and helps him during his shows. Zampanò ill-treats her. She meets "The Fool", a funambulist. She feels like going with him, but he puts confusion in her mind by pointing out that perhaps Zampanò is in fact in love with her. 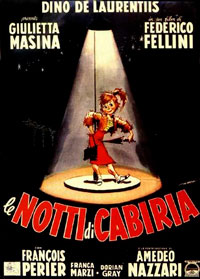 Cabiria is a streetwalker living in a poor section of Rome where she owns her little house, has a bank account, and dreams of a miracle. We follow her nights (and days): a boyfriend steals 40,000 lire from her and nearly drowns her, a movie star on the Via Veneto takes her home with him, at a local shrine she seeks the Madonna's intercession, and then she meets an accountant who's seen her, hypnotized on a vaudeville stage, acting out her heart's longings… 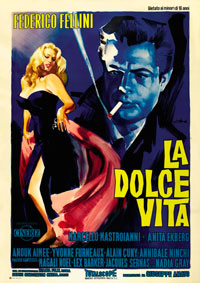 On assignment to chronicle the lives of the rich and famous Italian aristocracy in a gossip column for a Roman newspaper, Marcello Rubini (Marcello Mastroianni) floats from one fabulous party to the next, meeting all varieties of beautiful, and extravagant people. While he would never protest this seemingly ideal job, it makes him feel lonely and empty, and he stays up drinking and dancing night after night only to wake up each morning unbalanced and unfocused.

Guido Anselmi (Marcello Mastroianni), a filmmaker who is at a crisis point in his life and his work, struggles to make a new movie. This creative block triggers his memories, so he starts recalling important moments in his life and all the women he loved. 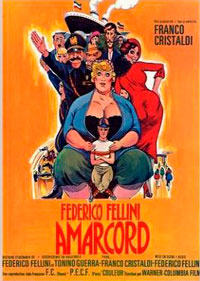 One year in a small northern Italian coastal town in the late 1930s is presented. The slightly off-kilter cast of characters are affected by time and location, the social mores dictated largely by Catholicism and the national fervor surrounding Benito Mussolini and Fascism.