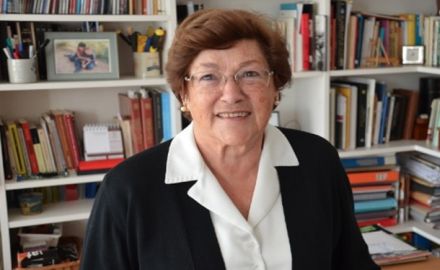 Pilar Benejam is a retired professor in the Department of Language and Literature and Social Sciences Teaching at the UAB, where she taught from 1972 to 2004. A teacher at the Balearic School of Teaching (1961), with a degree in Pedagogy (1966) and History (1972) from the University of Barcelona, Professor Benejam holds a PhD in Pedagogy (1985) from the UAB. She was one of the signatories of the declaration of principles known as the Bellaterra Manifesto, which was made public in 1975. In addition, she was general coordinator of the educational centers of the Barcelona Provincial Council (in catalan, Diputació de Barcelona) and director of the Institute of Educational Sciences of the University and is a member of the Rosa Sensat Teachers' Association.

She was part of several commissions dedicated to the reform of teacher training in Catalonia and Spain. She is an expert in reviewing pedagogical renewal, didactic innovation and school programming in the Social Sciences (especially in the field of Geography) and has advised public administrations in reference to the entire training cycle.

Pilar Benejam has received, among other distinctions, the Creu de Sant Jordi of the Generalitat, the Ramon Llull Prize, the Jaume Vicens Vives Prize and the Marta Mata Prize (within the Catalonia Education Awards 2011).

In 2019 she made a donation to the Humanities Library consisting of essays, textbooks, journal articles, conference proceedings, etc., which contains all his scientific output, focused on Education, Social Sciences and Geography.