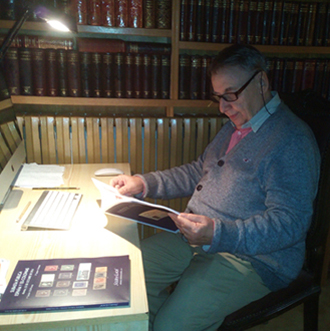 Antoni Reguant was born in Sabadell in 1942. He is an industrial engineer of the Barcelona School of Industrial Engineers and a computer science graduate in the first year of the Technical University of Madrid. He also studied mercantile and expert studies at the School of Commerce of Sabadell. His career has been developed in the business world and has been dedicated to the counseling and organization of societies in recent professional years.

But the great passion and at the same time the great challenge of this businessman has been collecting books, mainly of mathematics, but also of physics, chemistry and science applied to engineering.

This unique collector gave the UAB a large part of his personal library of 3,353 monographs and 9 magazine titles.

The collection can be divided into four sections:

Where to consult the documentation: Science and Technology Library and Communication Library