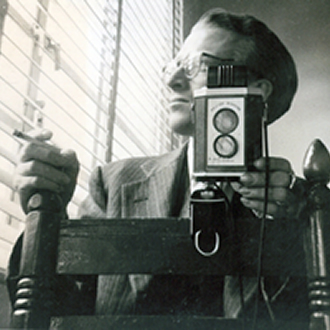 Pere Calders i Rossinyol (Barcelona 1912-1994). Writer and cartoonist. He worked for magazines, such as the Esquella de la Torratxa, among others. At the end of the Civil War he was exiled to Mexico where he lived until 1962. He received, among other awards, the Creu de Sant Jordi (1982) and the Prize of Honour of Catalan Letters (1986). In 1992, he was awarded the title of Doctor Honoris Causa by the Universitat Autònoma de Barcelona.

Since 1995, the Universitat Autònoma de Barcelona, thanks to the efforts of the Department of Catalan, is hosting the collection of Pere Calders.

Where to consult the documentation: www.uab.cat/biblioteques/calders/