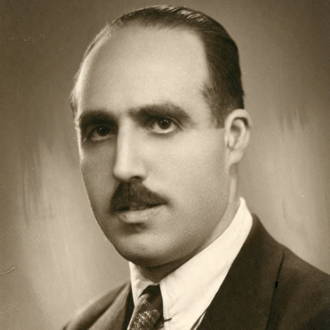 Sebastià Sánchez-Juan (Barcelona, 1904 – 1974) was a poet and copyeditor. He worked as a copyeditor for newspapers such as La Nau or El Matí. In his beginnings as a poet, he followed the futurist movement that arrived at Catalonia. In 1922, he published the Second Futurist Manifesto, for which he used the pseudonym David Cristià, and two years later, Fluid, his first book appeared, making his commitment to avant-gardism very clear. Other titles from this period include: Constel·lacions (1927), Elegies (1928), Divagacions (1929) or Poemes de promès (1933).

During the 40s, Sánchez-Juan published poetry in Spanish: Sonetos (1949) or Blanco y rosicler (1946). In the 50s he published again in Catalan. Principat del temps (1961) and Escaiences (1974), stand out among others from this second period.

The collection, donated by the Sánchez Bosch family to the Humanities Library, has been cataloged thanks to the collaboration between the Library and the Department of Catalan.

Where to consult the documentation: www.bib.uab.cat/human/fonspersonals/sanchezjuan/