The Observatori per a la Igualtat de la UAB conducts various awareness campaigns for students at the Autonomous University of Barcelona .

You can check them out and download materials to Correspondents links. 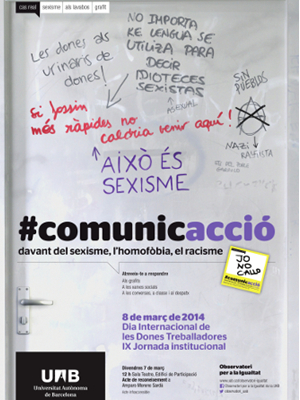 Because of the International Day of Working Women, 8th of march, and as is tradition, the Observatori began a campaign to commemorate the event.

This year the goal was to promote interaction with the student community and ensure that the campaign should not be limited to 8th of march, which there where developed tickers and posters (here) to encourage reporting and responding to situations discrimination in the UAB through hashtagh #comunicaccio, sending them through a private message on twitter and facebook the Observatory, or email.

The campaign was carried out in three phases, coinciding with the presentation of different materials, you can see all (and download all materials) on the "8 març", "No callis! (Geolocation)" and "Espais Lliures of discriminations ".

See all posts under the hashtag #comunicaccio (Facebook and Twitter).
On 7th of November 2013, on the occasion of the festival UAB the Observatori per a la Igualtat began the campaign "No és no!" in order to promote an awareness campaign about violence in relationships university and leisure areas. The campaign was used to perform data collection on the perception of different forms of violence in different parts of the campus.

These data, with a study conducted by the group Antigona from UAB, shows the presence of violence in relationships on campus: 21% of students participating states have ever experienced bullying, 14% Stalking 5.3 % and 3.4% sexual abuse sexual assault. 28% of cases occurred within the university facilities.

- Programm with all the activities of 25th November
- Poster of "No és no!"
- Video "Hi ha sexisme a la UAB?"  (from the collection of testimonies on the same day 25-N on their experience with discrimination at UAB) 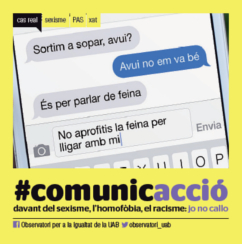 As a major activity, the Observatori honored on March, the 7th, at 12pm in the UAB's Theatre, Amparo Moreno, in an open to the entire community and could be followed live act. The session consisted of the conference "Contributions of feminism a pluralistic humanism", by the same honoree also reading a manifesto, the projection of audiovisual and communication about sexism, etc teacher.

Meanwhile, Observatori provided the respective materials "#Comunicacció" campaign: first poster and stickers, a series of three examples of different communicative situations (photo: illustration of one of the stickers).

Under the "Comunicaccio" campaign, the Observatori invited to report and respond to situations of discrimination in the UAB through hashtagh #comunicaccio, sending them via a private message on twitter and facebook of the Observatori. You can see the map here   (Want you to report a situation? Here  you have the instructions!). 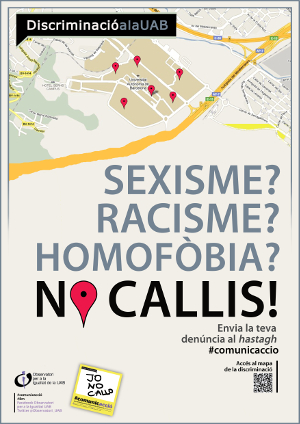 This campaign is born of perception within the university community and campus activities, of forms of latent, implicit discrimination, which often remain invisible and normalized by the same people who practice them or their environment. According to the director of the Observatori, Montse Rifà: "We wanted to go to the toilets of our university, explore the primitive that arises from immediate communication, which seems to show the worst, either in social networks, conversations bar or corridors ".

The attitudes, gestures, words, looks... are forms of communication that can be fraught with sexism, homophobia, racism or any other form of discrimination. With the campaign #comunicaccio we wanted to uncover all of these situations, make them visible, to respond.

To carry out the campaign, social networks were mobilized, under the hashtag #comunicacció, posters as the accompanying text and leaflets were distributed (available here). In addition, three explanatory videos were made with the instructions of the campaign:

You can still do complaints and responses that the Observatori's team will index on a geo-map, searchable here.
Humour has a social purpose: as Bourdieu said, humour serves to spread a habitus established by power. Humour reproduces mental schemes established by the hegemonic culture, which in our society is patriarchal.
We can say, then, that humour has a lot to do with power and hence is not neutral, but rather performed from top to bottom. It is then that humour stops being funny and becomes a tool for social control. Often it reproduces sexist stereotypes, trivialises male chauvinist violence, promotes rape, spreads toxic beauty referents, punishes non-hegemonic masculinity, etc. This cultural production in the shape of sexist humour gives continuity to the patriarchal system and male domination.
It is necessary to break the chain and become aware of the important consequences of being accomplices in sexist humour. We must become aware of the limit of humour, which is no other than the safety of people who suffer from structural violence. For this reason, at the UAB’s Observatory for Equality we have started this campaign by spreading four posters which depict four sexist jokes and their consequences. We share the campaign with the #JoNoRic hashtag so people can interact in social networks by rejecting sexist humour and preventing involvement.
Downloadable material:
- Potsers

On November 10th, 2016 the yearly UAB’s Festa Major took place. To mark the occasion, the Observatory for Equality carried out the “Keep your hands to yourself” campaign with the goal to make the Festa Major a space free from harassment, discrimination and sexism. This goal is part of the Third Action Plan for Equality between Men and Women at the Universitat Autònoma de Barcelona (Axis 4, measure 4). In order to raise awareness among the university community, the Observatory for Equality has spread the poster of the “Keep your hands to yourself” campaign with a list of sexist behaviours and the phone number of the security services.
On the other hand, the detection and intervention in sexist violence situations has been anticipated with the Protocol to face and intervene during sexual assaults at the UAB’s Festa Major. In the context of this protocol, training for security staff on the intervention in sexist violence with a gender perspective has been carried out. The protocol has become known very successfully among the UAB community with the anti-sexism kit, which details what to do in case someone is attacked.
In the context of the “Stop LGTBI-phobia at the UAB” institutional campaign, the Observatory created a leaflet to inform people who suffer from harassment based on sexual orientation, gender identity or gender expression about the legal tools available to them.
Downloadable material:
- "Keep your hands to yourself" poster, LGTBI-phobia leaflet and anti-sexism kit.
- Festa Major proclamation by Miquel Missé 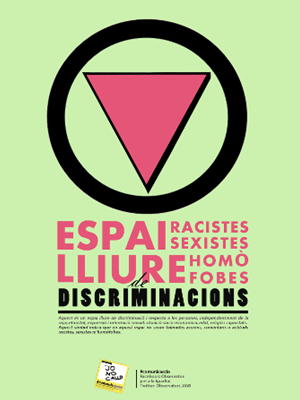 "This is a free space of discrimination and we respect people, regardless of race, ethnicity, expression, sexual orientation, etc.", this can be read on the poster for "Espai Lliure de discriminacions" within the third phase of "#comunicaccio" which began on 8th of march and that, among other things, proposed report and respond discrimination on campus to make a "Map of discrimination"-open and searchable here-.

Observatori wanted to take a step to move towards a university free from discrimination, urging the university community to adopt a commitment to prevention and action against discrimination of any kind. That is why this phase calls for the UAB community to declare their free spaces "sexism, racism and homophobia" poster hanging on the jobs, assuming the proposed message.

In order to give the starting signal to this part of the campaign, on May 20th at 13h a symbolic action in the Civic Square was performed by painting the symbol of the poster (as in the picture accompanying this text): see also the photographs of the day. In addition, a bulk mailing to the attached poster "4 Ways to contribute to college less inequality" (see it here) was made.

You can download the poster here "Espai Lliure discriminacions" and hang it in your living space. 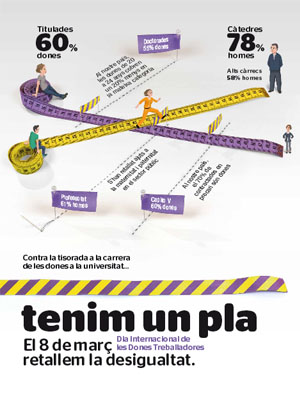 This campaign was designed to encourage the whole university community to collaborate during the 2013 in the elaboration process of the Third Action Plan for Equality between women and men at UAB through the following ways:

- Filling in the questionnaire on the awareness and evaluation of the Second Action Plan for Equality UAB.

- Visiting the observatory's stand of the 8 March at Plaça Cívica.

- Joining us in the discussion or work groups that take place during March and April. 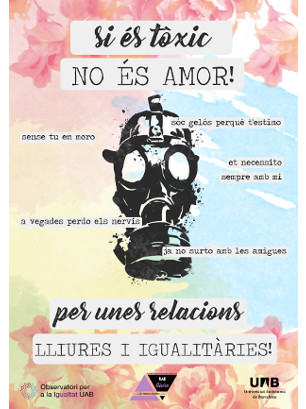 On the occasion of this year’s Diada de Sant Jordi, Book and Lover Day in Catalonia, we would like to invite you to rethink the way we establish our social and emotional bonds.
We believe that love (not only in couples) is one of the most powerful development and change drivers in our society, and for this reason, we cannot allow romantic love mechanisms to poison our way of loving people. The myths of soul mates, exclusivity, possession, sacrifice, etc. cause jealousy feelings, fear of being alone, insecurity and emotional dependence. This creates unhealthy and unequal relationships that ease violent practices between the couple.
It is for this reason that we believe in the constructive and transformation potential of love, and we reject any toxicity in affective relationships. Rethinking a new world is closely related to rethinking our conception of love.
Downloadable material:
- Poster

On the occasion of November 25th, International Day against Male Chauvinist Violence, the Observatory for Equality carried out a campaign against sexual and sex-based harassment at the UAB, because it represents the worst type of male chauvinist violence in the university campus. Taking advantage of the recent approval of the Action protocol against harassment, we have wanted to give visibility and clear the concepts of sexual and sex-based violence using a list of behaviours, in order to raise awareness among the UAB community. At the same time, we have also wanted to remember the existence of the Protocol as a tool in the struggle to eradicate male chauvinist violence at the universities.
Besides, all the UAB university community was invited to share a minute of silence at the Plaça Cívica to remember all the women killed during the year. A manifesto by the director of the Observatory, Joana Gallego, was also read, and a purple ribbon was hung on the Agora building facade.
Downloadable material:
- 25N poster
- Video of the minute of silence and reading of the manifesto