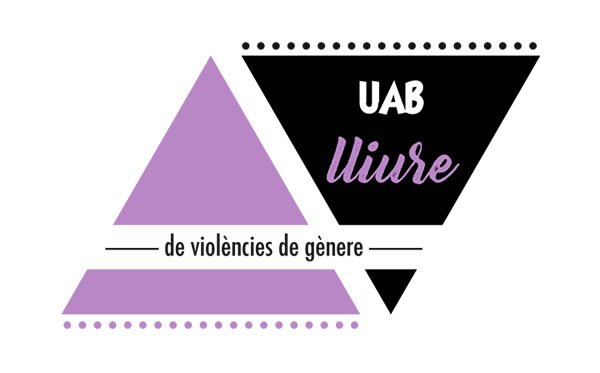 The project begins in 2013 and is an answer to the application of measure 4.5. “Design and implement a comprehensive proposal to eradicate gender violence and abusive relationships, to increase institutional coordination, and include in it a protocol and a procedure to report and take care of sexual harassment, sex-based harassment and sexual orientation-based harassment cases ” of the Third action plan for equality between women and men at the UAB.
The main goals are the following:


In this section you will find the resources and actions developed as part of this project:

Protocol against sexual harassment and harassment on grounds of sex, sexual orientation, gender identity or gender expression by the Autonomous University of Barcelona

Agreement by the Governing Council of 7 November 2018. By approving this protocol, the UAB joins other Catalan universities which already have mechanisms to confront and prevent sexual harassment and harassment on grounds of sex, sexual orientation, gender identity or gender expression among the university’s community, including the student body.

The protocol applies to all students of UAB and all staff currently employed or who have had labour or statutory relationship with UAB. It also applies to all staff from external companies contracted by the UAB to provide their services within the university’s facilities, and all persons who enjoy services provided by the University or engage in activities within the campus.

The Observatory for Equality will be responsible of the attention, assistance and support service for those people who decide to make use of the Protocol. The Observatory will create a yearly report on the presented complaints and the adopted measures, which will be sent to the University Senate.

Any individual who knows about a case of harassment, whether he or she is the victim, may start the procedure by submitting a request for the attention of the Rector to convene the Technical Advisory Commission. The request, which shall be accompanied by a closed envelope containing the description of the facts, can be submitted in any office of the University’s General Registry, such as Academic Administration Offices, Teaching Units, or the Central Administration and Executive Offices (Building A).

The action principles in the protocol guarantee the assistance and protection of the dignity of the people involved. The whole procedure and its documents are absolutely confidential. Besides, the protocol establishes the making of all necessary actions to guarantee the absence of reprisals against people making use of it, in the present and in the future.

The UAB Observatory for Equality, through the Psycho-Gender Unit, offers the UAB community a reception, counselling and psychological monitoring service for people who have lived or live abusive relationships or gender violence. This service is free for the people who are part of the UAB community (students, administration and service staff, and teaching and research staff).

The management and development of this psychological and psychosocial assistance service by Psychogender is done in a coordinated manner with the Observatory for Equality of the UAB. You can contact us via email: (Psychologist: Arantxa Sabanés) psicologia.perspectiva.genere@uab.cat

Personally, in the Psycho-Gender Unit, SIPEP. Faculty of Psychology. Building. B. Campus UAB or by calling the Faculty: during the week: 93 581 2901 (Marta Galán); to the SIPEP: Monday and Thursday, 93 581 3754 (Mª Pau González Coordinació) or to the academic responsible: 93 581 1980 (Margot Pujal). You can also request information from the Observatory for Equality (Technical Responsible, Laura Duarte: 93 581 2929).
More information on the Psycho-Gender website: http://serveis.uab.cat/psicologiagenere/content/presentació

Action guide against sexism and gender violence for UAB associations. 2018

The UAB, through the Observatory for Equality and with the collaboration of Dinamització Comunitària, offers to associations a guide to face sexist situations and gender violence that could take place inside the association.

The goal of this document is to become and instrument giving training tools and specific guidelines to the associations registered on the UAB’s association community record, in order to prevent and act against sexism and gender violence cases that could take place during their activities, both one-time and continuous situations.

Every association will have to adapt and approve the guide, and for this process it will have the support and assessment of the Observatory and Dinamització.

The protocol was created in 2016 to provide the university’s Security Service with guidelines to intervene in the case of sexual assaults at the UAB’s Festa Major. The document has been created by the Observatory with the collaboration of Dinamització Comunitària, the Unit on Psychogender and committed people and associations. It takes as a reference the festa major protocols by two Barcelona neighbourhoods, Poble-sec and Gràcia, as well as that by the city of Sabadell.

The air of the Festa Major cannot be an excuse for sexist and violent attitudes. It is important that the whole university community is aware and can recognise sexist behaviours. Lecherous looks, sexist jokes, insults, humiliations, molestation, insistence, harassment and jealousy are signs of sexists attitudes and are part of both the protocol and the campaign  derived from it.

To enforce the protocol, there are training actions addressed to security forces and stage managers. Likewise, the Observatory has also cooperated with the student and association stands so they prevent sexist situations organising activities which do not promote sexism, establishing equal shifts for the stand participants and analysing possible sexist attitudes.

FMUAB PROTOCOL
Women who are victims of male chauvinist violence, as well as the children depending on them, to continue their official degree studies in a university different from the one where they began studying. The goal is to allow the affected person to continue their studies, as shortly as possible, via the transfer of their records, in any of the universities of the Catalan system chosen by them.

In order to certify their consideration as a victim of male chauvinist violence, the affected person will be allowed to provide the following as qualified evidence:


In the absence of this evidence, the existence of the following signs will also be considered a male chauvinist situation:

The Observatory for Equality has organised several awareness campaigns on gender violence addressed specifically to the UAB student community. A remarkable campaign is No siguis paparra!, which began during the 2016 edition of the UAB’s Festa Major with the goal to make the party and the university a space free from harassment, discrimination and sexism.

In 2017 the action Training on gender violence at the UAB began as part of the implementation of the Action protocol against sexual harassment and harassment based on sex, sexual orientation, gender identity or gender expression at the UAB. It originates from the agreement signed with the Brunel University of London to participate, as an associated partner, in the project Universities Supporting Victims of Sexual Violence (USVSV): Training for Sustainable Student Services. The USVSV project began on March 2016 an ended on February 2018, and has as a goal to raise awareness and give resources to the university community so it can answer and act accordingly if a case takes place.

The participation in this project has allowed the UAB to get training for trainers on gender violence at universities. Finally, it has allowed it to run training courses to raise awareness and take immediate care of harassment situations in the campus. More specifically:


1. Raise awareness against gender violence.
2. Get people to know about the tools and procedures offered by the UAB to its community to face and intervene in harassment situations.
3. Create a network of people trained in this area.

Currently we coordinate workshops and courses addressed to the three communities in the UAB: students, teachers and administration and service staff.


Recommendations to prevent and fight sexual harassment in the academic institutions

The document contains a set of recommendations set and signed by the 7 partner universities of the EGERA project, from which the UAB is a preferred partner via the Observatory for Equality. These recommendations aim to prevent and combat sexual harassment within the academic institutions.
“Academic institutions shall categorically reject any form of sexual harassment, and prevent and fight it when and where necessary.”

For further information, please check the Recommendations to prevent and fight sexual harassment in academia