The SCV and the ACV are digital resumes that provide a standardized content and pattern, thus enabling the shift towards e-government. It must be taken into account that these are currently the formats that must be submitted to state-wide calls for the financing of R&D&I projects.

Both patterns have been developed by the Spanish Foundation for Science and Technology (FECYT) and the former Ministry of Economy and Competitiveness (MINECO).

The format of the SCV in its latest version as well as that of the ACV issued from EGRETA, are certified by the FECYT.

The SCV (Standardised Curriculum Vitae) is a project of the FECYT and aims to create a single CV format which can be used in all areas of knowledge and may be presented at any type of call for papers, proposals or other applications.

The SCV is also a norm that establishes the pool of technical specifications that regulate all the areas of the standard curriculum. That is to say, it is the regulation that have to track all the curriculums adapted at the norm SCV so that have cohesion at an only format.

Once in the app access at the maintenance Curriculum Vitae and elect the option CV by FECYT. 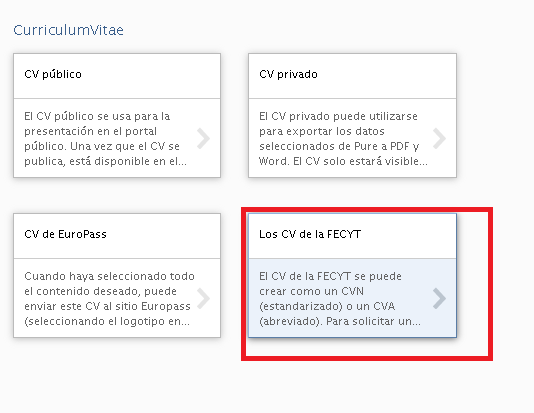 Also it can generate through the agent curricular that the same FECYT puts at disposal of the researchers, the universities of which do not have of a tool of management curricular certified.

The SCV compilation the data that it FECYT has established that they form part of the curriculum of the personal researcher of the system of Spanish science. In order that can appear , the data have to be introduced.The information that is not introduced in the app won't be shown at the curriculum and will not be able to be incorporated at the document generated.

Bear in mind that any manipulation of the SCV certified invalidates it automatically and therefore the proprietary headquarters stays excluded of the announcement at which wants to take part.

The ACV (Abbreviated Curriculum Vitae) is another model of more normalised curriculum short that the SCV and that has two formats one at .rtf and therefore modifiable for the user and a certificate for the FECYT, that the SCV can not be at any case manipulated once generated.

It is useful to apply for the announcements of public aids of the State Plan that require it.

The system that has the UAB permits, at these moments, the obtention of the ACV certified by the FECYT mediating the app of update curricular EGRETA. Once in the app access at the maintenance Curriculum Vitae and select CV by FECyT.

The ACV certified collects the data that previously the researcher will have selected of the information that features him in the app EGRETA and that FECYT has signified that they are susceptible to form part of this format curricular. Same as with the SCV, if the information is not introduced at the app will not be shown at the curriculum.

An aspect at taking into account is that ACV certified no sample all the data that can show the ACV with format .rtf. At the modality certified appear  the personal data, the digest of the activity researcher,  the indicadorsque can be included, the publications, the aids, as well as the patents, whereas if it wants to that they appear the activities of enquiry (turnout at congresses, conferences, etc.), the doctoral theses directed or other type of information that the researcher or the researcher considers notable, these will have  to append at the section of digest of the activity researcher, whereas at the format .rtf there is a specific section for cadascuna these data.

Bear also in mind that as with the SCV, any manipulation of the ACV certified invalidates it automatically.

List of Calls for Research Grants (own, national and international) and announcements of interest on them.