To have a child lead an orchestra is certainly an anomaly; yet, this situation was encouraged, celebrated, or simply tolerated hundreds of times throughout the twentieth century. This talk will reconstruct the western cultural phenomenon of the child conductor figure, from its emergence in music halls in the 1910s, to the consolidation of this figure within the classical music industry during the late 1940s. Issues such as the professionalization of child maestros and their rise to international stardom will be addressed. Different profiles of child conductors will appear, from the ‘first’ child conductor (Willy Ferrero, Rio Gebhardt…), to the celebrity child maestro (Pierino Gamba, Roberto Benzi…), and the ‘girl’ conductor (Giannella de Marco). So far, the history of conducting has not shown any interest in the child conductor figure, perhaps because these children did not contribute to the advancement of conducting techniques. Scholars agree that child prodigies are particularly absent from this music domain, especially in comparison to virtuosos, which are the most abundant type of prodigy. It is precisely because they were fewer in number that we can attempt to look at child conductors as a cultural phenomenon, instead of focusing on a particular case. 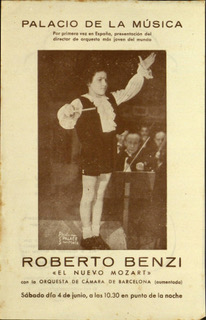 Andrea Graus is researching the history of child prodigies in the 19th and 20th century Europe. She is a Beatriu de Pinós fellow (a Ramón y Cajal fellow starting in May) at the Milà i Fontanals Institution (CSIC). She was previously a Marie Curie fellow at the Centre Koyré (CNRS) and a postdoc at the University of Antwerp. She has published on topics such as the history of psychical research, hypnosis and mysticism. Author of Ciencia y espiritismo en España (Comares, 2019), co-author of a book on stigmatics (Brill, 2020), and co-editor of several special issues, the last one on the history of giftedness in children (Dynamis, 2020).