History of the UAB 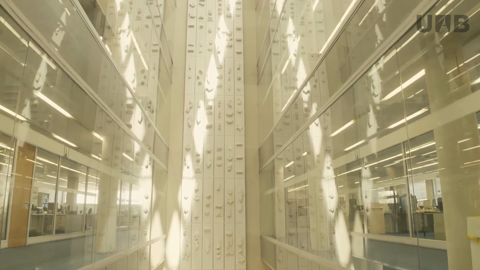 The history of the UAB begins on 6 June 1968, when the decree on the creation of the Universitat Autònoma de Barcelona (UAB) is officially promulgated. One month later the first four faculties are created: Philosophy and Arts, Medicine, Science and Economics. That same July 1968, Dr Vicent Villar Palasí was named president of the Promotional Committee of the UAB, a position which he maintained until August 1970, in which he became president of the Board of Trustees and the first rector of the UAB. Teaching activities at the UAB began in October 1968 in two of the new centres: the Faculty of Philosophy and Arts, which was located in the Monastery of Sant Cugat del Vallès, and the Faculty of Medicine, which was located at the Hospital de Santa Creu i Sant Pau in Barcelona. The hospital recovered its condition as a university hospital and became the first centre of clinical training of the UAB. The following academic year, in 1969/70, classes began to be offered at the Faculty of Science, also located at the Sant Pau Hospital, and the Faculty of Economics and Business Studies, located at the Language School of Barcelona, in the Drassanes neighbourhood. The initial stages of the Universitat Autònoma de Barcelona ended with the creation of the Faculty of Law and the Faculty of Information Sciences in 1971, theUniversity School of Translators and Interpreters in 1972 and the “Sant Cugat” University School of Teachers in 1973.

At the same time, in February 1969 land was bought in the Bellaterra district of the municipality of Cerdanyola del Vallès, the place of the future university campus, the UAB's Bellaterra Campus.

Since its first years, the UAB strived to set the foundations for a university model based on the respect for the basic principles of autonomy, participation and social commitment. This model unfortunately did not receive support from the then authoritarian dictatorship of Francisco Franco, who in 1973 suspended the university's statutes and relieved Rector Villar Palasí of his position. Two new rectors were appointed successively: Dr Vicent Gandia Gomar and Dr Josep Cabré Piera. Nevertheless, the convictions with which the UAB began to take its first steps explain the drafting of the Bellaterra Manifest in 1975, the first document to vindicate an autonomous, democratic and socially responsible university.

In 1976, the UAB Board of Trustees was dissolved and Dr Josep Laporte was elected rector of the UAB by the University Senate. In 1979, the UAB passed its second statutes.

In 1982, under the mandate of Dr Antoni Serra Ramoneda, a new teaching centre was created, the Faculty of Veterinary Medicine. During this period, research at the UAB became widespread on campus thanks to collaborations with other entities and organisations such as the Spanish National Research Council (CSIC) and the Government of Catalonia. With regard to governance, in 1985 the UAB's third statutes were passed, drawn up according to the University Reform Law (LRU, 1983).

Academically, at the beginning of the 1990s, during the term of rector of Dr Josep M. Vallès Casadevall and twenty years after their creation, the university schools of teaching and translation became faculties. Thus, in 1992 the Faculty of Education and in 1993 the Faculty of Translation and Interpreting was created.

Also during the 1990s, the UAB completed its development and transformation into a campus university. In 1992, the UAB inaugurated the Vila Universitària and in 1996, under the term as rector of Dr Carles Solà Ferrando, the university inaugurated a series of areas and services at the new Plaça Cívica, making it the centre of the cultural and social life of the university.

The UAB, which since the first years has offered computer and chemical engineering studies, apart from other technical specialities, in 1998 celebrated the creation of the Higher Technical School of Engineering (ETSE), thus completing the range of centres and studies in all areas of knowledge.

During the 1990s there was also a notable increase in social responsibility actions and programmes, making it clear that the UAB was and is committed to society and to the community surrounding it.

In September 1999, the most emblematic symbol of the university was inaugurated, the UAB Columns, work of the Valencian sculptor Andreu Alfaro.

From an academic viewpoint, the terms of Rector Lluís Ferrer Caubet were marked on the one hand by the adaptation to the Organic Law on Universities (LOU, 2001), and on the other hand by the Bologna Process. The adaptation to the LOU led the University Senate in 2003 to pass the UAB's current statutes. With regard to the process of adaptation to the European Higher Education Area, the UAB decided from the beginning to take on a process of convergence as an opportunity for the internationalisation of the university, thanks to the creation of competitive, high quality academic programmes which promote the mobility of students. The decision to internationalise the UAB was made even more visible with the creation in 2007 of the International Welcome Point.

With regard to social responsibility, Rector Lluís Ferrer was also at the head of the creation of two socio-educational programmes aimed at bringing the university closer to secondary school students in risk of exclusion. Both programmes soon became model outreach programmes: the Programa Argó and the Campus Ítaca, as well as the creation in the 2005/06 academic year of the Observatory for Equality.

With regard to knowledge transfer in the productive sector, the intensification of relations between university and businesses and the promotion of entrepreneurship, the UAB took an important step forward in October 2007, when it inaugurated its UAB Research Park (PRUAB), put forth by the UAB, the CSIC and IRTA.

With regard to the external projection of the UAB, the university began to include active policies designed to attract talent and to expand the international relations of the UAB. The UAB opened its office in Shanghai in 2008 and is also member of strategic alliances such as the European Consortium of Innovative Universities (ECIU) and the Alliance of 4 Universities (A4U).

Under the framework of the UAB's adaptation to the European Higher Education Area, in 2009 the UAB created the Faculty of Economics and Business Studies and the School of Engineering, as a result of the fusion between already existing UAB centres in the Bellaterra and Sabadell campuses in each of these fields.

Towards the end of 2009, the year in which Dr Ana Ripoll Aracil was elected rector, the UAB received recognition as a Campus of International Excellence for its project "UAB Campus of International Excellence: promoting knowledge, encouraging innovation", an ambitious strategic plan to transform the UAB and its surroundings into one of the most important scientific and technological poles of the Mediterranean.

Whilst Ferran Sancho Pifarré was rector of the university (2012-2016), the UAB set up new student-support programmes as a means of lessening the effects of the economic crisis and the notable increase in university fees.
Within the academic ambit, the UAB has maintained its pioneering character through exploring innovative forms of teaching, becoming one of the first universities in Europe to offer massive open online courses (MOOC) via the internationally renowned platform, Coursera.

The ICTA-ICP bioclimatic building was inaugurated in 2014; this is recognised as one of the finest national projects in sustainable architecture, and represents a step forward in the UAB’s commitment with the environment and in the responsible management of spaces and resources.

During Rector Margarita Arboix’s mandate (2016-2020) the UAB has become the first Catalan university to obtain quality certification for internal management processes and has also consolidated its internationalisation strategy with its participation in the ECIU University – a new model of international university that aims to respond to social challenges through innovative methods and research.

Under the motto “The Audacity of Knowledge” during the 2017-2018 and 2018-2019 academic years the UAB celebrated its 50th anniversary with different institutional and cultural events on the campus and the surrounding cities, with an emphasis on the milestones achieved over these fifty years. In parallel the university has also launched a strategic reflection process to define the vision of the university in the strategic lines of Horizon 2030.

On 13 November 2020 Dr. Javier Lafuente Sancho took over as rector of the Universitat Autònoma de Barcelona.

After 50 years of existence, the UAB has consolidated amongst the 200 best universities in the world within the main university rankings.