An article published in the journal Brain Communications, coordinated by Carlos Barcia, researcher at INc-UAB, describes how the immune system facilitates the expansion of tumour cells in the brain. The study was performed on human samples of glioblastoma, the most aggressive brain tumour, and on cell culture models.These findings will help to develop treatments for this type of tumour, for which there is not an effective therapy at the moment.

In a study published in Brain Communications, a new Open Access publication of the well-known journal Brain, the team led by Carlos Barcia, researcher at Institut de Neurociències of the Universitat Autònoma de Barcelona (INc), analysed the role of immune cells in the expansion of glioblastoma, the most aggressive brain tumour. The study is a collaborative effort with the General Hospital in Valencia, and part of Elena Saavedra's doctoral thesis.

The research shows for the first time that microglia and macrophages, cells of the immune system, facilitate the invasive capacity of glioblastoma by clearing the necrotic areas of the tumour while ignoring tumour cells in its niche of invasion.

This invasive niche, which is the part of the tumour that comes into contact with the healthy tissue, is shaped like a pseudopalisade and is poorly irrigated by blood vessels. This results in a lack of oxygen -hypoxia-, which causes, on the one hand, that the tumour cells escape and invade healthy tissue, and on the other, the creation of a necrotic area inside the tumour. Researchers show, in this study, that microglia and macrophages travel to these hypoxic areas and only clean dying tumour cells, facilitating tumour growth and expansion. 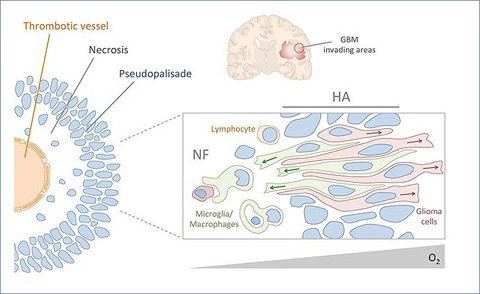 "The importance of this work is that we observed for the first time the presence of immune system cells in these particular tumour’s invasive areas, and also that the phagocytic capacity of immune cells is not lost and could be trained to facilitate the removal of tumour instead of helping its growth" says Carlos Barcia.

The next step, then, is to study how microglia cells and macrophages could be trained, through immunotherapy or other strategies, to not play in favour of the tumour, but to contribute to its elimination.