UAB participates in the project to monitor daytime butterflies in Catalonia

The Catalan Butterfly Monitoring Scheme (CBMS) network monitors daytime butterflies at stations in Catalonia, Andorra and the Balearic Islands. The project, coordinated from the Museum of Granollers-Natural Sciences, began in 1994 with a monitoring network of eleven stations. By 2020, data had been collected from 185 stations.

The methodology followed in Catalonia is known as the Butterfly Monitoring Scheme (BMS) and was developed in England in the mid-seventies. The aim is to find out changes in the abundance of butterflies from the weekly repetition of visual censuses along fixed transects, in order to be able to relate them later to different environmental factors. Butterflies thus function as bio-indicators of possible changes in terrestrial ecosystems.

The BMS itinerary at the UAB

The UAB joined the CBMS network in 2005, supporting the implementation of a transect on campus. The route takes advantage of one of the two nature itineraries already defined (the blue route, located in the northwest of the campus), which includes meadows and grasslands, interspersed with woods, bushes and crops. This transect is divided into ten sections and is 1.5 km long.

The most abundant butterfly species on the campus are present in many places in Catalonia, but there are also some butterflies typical of Mediterranean environments.In the period 2005-2015 and 2017-2021, 14.943 butterflies have been counted on the campus, with an annual average of 934 specimens. In the UAB BMS surveys, 50 butterfly species have been detected, with an annual average of 31 species. 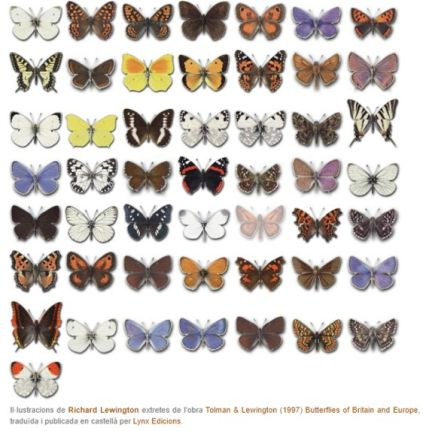 See the rules for public use on Campus

Examples of measures implemented on campus