Climate change is altering the quality of Pyrenean mountain water

A study led by the UAB reveals that climate change is increasing the natural acidification of the head of freshwater rivers in the Pyrenees at an alarming rate. The process is expanding and the increase of potentially toxic compounds could affect the quality of hydrological resources at medium and lower elevations.

The acidification of hydrological resources in the Pyrenees is not a problem found only in specific parts of the Central Pyrenees, as believed until now. The problem extends over several areas of the mountain range. These are the conclusions reached by a preliminary study led by the UAB in collaboration with the University of Girona (UdG) and with support from the Ministry for Ecological Transition's Biodiversity Foundation.

The study, directed by Mario Zarroca from the Department of Geology, has enabled researchers to document the most affected river systems and announce the problem to the local and regional administrations.

According to researchers, "our results suggest that climate change is the cause that triggered this phenomenon, since it has been possible to establish a correlation between extended periods of drought and the increase in natural acid-drainage processes”.

The acidification of rivers can be detected due to the turquoise colour of the water and the formation of whitish precipitates rich in aluminium covering the riverbeds.

The researchers highlight the importance of conducting a study at a larger scale with the aim of narrowing down the causes and begin designing preventive and corrective strategies. “The potential toxicity of the metals and metalloids released into the surroundings, such as arsenic, aluminium and nickel, especially through the water, is widely known", researchers point out. 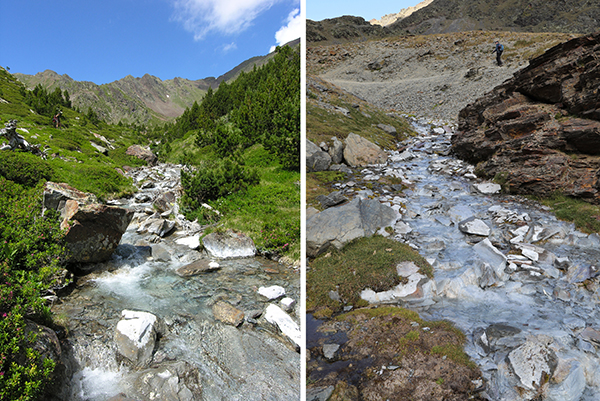 It was conducted using geomorphological mapping techniques in the fieldwork and the study of multi-temporal series of aerial photos and images, geophysical explorations using electrical resistivity imaging and georadars, as well as through hydrochemical, isotopic and bioindicator sampling, and analysis of climatic series.

Coordinated by the ICFO and with the involvement of the UAB, the CNM, the IFAE and the ICN2, and other institutions, the objective of this consortium is to promote technology and innovation transfer projects with short and mid-term industrial and social impacts.