This year, the UAB research group in charge of the rescue mission at the necropolis of Kom el-Khamaseen, in southwestern Saqqara, discovered over 100 funerary statuettes of the Egyptian high priest Imephor, each one unique in shape and conception. Researchers also worked on a second site at the royal temple, where they uncovered several fragments of the paintings decorating the building's walls.

This year's campaign is the third by the Spanish-Egyptian Mission in South-West Saqqara, conducted by the UAB and led by Department of Antiquity and Middle Ages lecturer Josep Cervelló, who is also the director of the Institute for Ancient Near Eastern Studies (IEPOA). The dig lasted one and a half months and allowed researchers to complete a systematic excavation of the Kom el-Khamaseen necropolis, which contains the mastaba Imephor Impy Nikauptah, the High Priest of Ptah, main divinity of Memphis, capital of the country during the Old Kingdom and First Intermediate Period in Egyptian history (2400-2050 BCE).

This year's most important and surprising finding has been a collection of over 100 statuettes of the high priest Imephor, and the priest's full name inscribed in his right arm. These statuettes are completely unique, each with a different shape and conception of the priest, all measuring from 15 to 30 centimetres. The statuettes are similar to the other 12 statuettes archaeologists know to be circulating in the illegal antiquities markets, of which only one has been successfully recovered. Last year researchers recovered two small, highly deteriorated fragments of these types of statuettes, and this gave them a clue about where to find the rest of the collection.

Researchers were also able to recover from Imephor's mastaba 38 blocks or block fragments with inscriptions and reliefs which mainly proceed from the ceiling of the funerary chamber. Made up of two parellel lines of hieroglyphics containing the name and title of the priest, these fragments have allowed researchers to rebuild the chamber's cieling almost in its entirety and fully determine the content of the inscription.

To the northeast of Kom el-Khamaseen, in a second site licensed to the Mission and discovered by researchers in 2019, which they named Square Building, the work conducted by archaeologists showed signs of being a royal building used for cultural purposes, measuring 37.5 × 33.8 metres, and built using sun-dried bricks and limestone (threshold and column bases) with a clearly defined main body and a series of corridors and lateral chambers.

In the main body of the building researchers made a discovery they qualify as exceptional: a set of frescos in vivid colours formed by hundreds of fragments of stucco, some measuring 30 centimetres long. Despite their condition, very fragmentary, they made it possible for researchers to identify regal iconographic motifs, such as a king decorated with an uraeus, the Horus of Behdet with its wings spread out, a horse and a war chariot.

"Since these motifs are clearly associated by theme and sytle with the royalty of the New Kingdom, and we have not found any evidence of its use as a funerary chamber, we are working with the initial hypothesis that the building was a regal complex of worship dating from this time of the Egyptian history (1550-1070 aC)", explains Josep Cervelló.

Another essential characteristic of this site is the large amount of pottery (36 in total) found in the surrounding area, dating back to the New Kingdom and structurally and semantically related with the complex. Several elements suggest that the building from the New Kingdom was built on top of an older site, from the Old Kingdom. "Future campaigns will allow us to clarify this, and that will be particuarly helpful with the scientific objective of our project: studying the cultural occupational patterns of the region during the Old Kindgom and First Intermediate Period", specifies Cervelló. 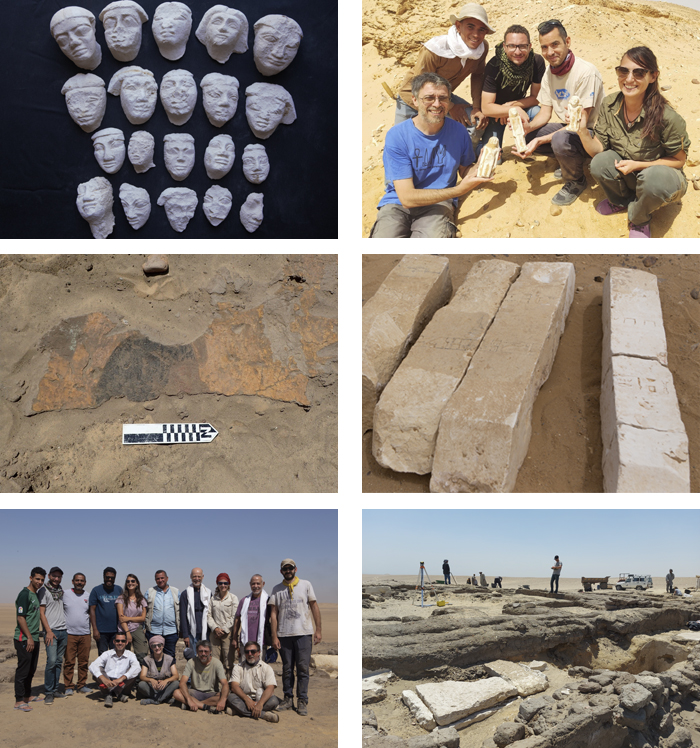 From left to right and top to bottom: sectioned faces of the Imephor Impy Nikauptah statuettes; part of the research team celebating the appearance of the first three statuettes; fragment of a fresco of the head of a king with his hand on Horus; pilars with inscriptions; the UAB and the Supreme Council of Antiquities team in the 2022 campaign; and digs of the Square Building. Photos: IEPOA-UAB/Lluís Tudela.

Other works carried out this year have allowed archaeologists to document the lithic industry of the extense desertic area included in the concession, which was preliminarily dated from the Middle Palaeolithic (Middle Stone Age). "This has allowed us to reflect on the role northern Egypt had in the migration routes of Homo sapiens in Africa", the UAB researcher points out.

The Kom el-Khamaseen project, by the Spanish-Egyptian Mission in South-West Saqqara, is organised by the IEPOA-UAB and the Egyptian Supreme Council of Antiquities, and includes the financial support of the Ministry for Science and Innovation, Ministry for Culture and Sport, the Catalan Institute for Classical Archaeology, the Palarq Foundation and the company Image Tours.

The Saqqara rescue mission conducted by the UAB research team also includes the support of several individuals who participated through a crowdfunding campaign forming part or the UAB's research project funding campaign.