How do genomes evolve between species? The key role of 3D structure in male germ cells

A study led by scientists at the UAB and University of Kent uncovers how the genome three-dimensional structure of male germ cells determines how genomes evolve over time. Published in Nature Communications and carried out in rodent species, shows that the distinctive events occurring during egg and sperm cell production have a different impact on genome evolution and opens new research paths into the genetic origin of genome structure in all organisms.

Comparison of genomes across many different mammalian species shows that while all species have a broadly similar catalogue of genes, these are arranged in a different order for each species and can be turned off and on differently. These rearrangements may affect gene function and regulation and, therefore, play a part in evolutionary changes and in defining species identity. Until now, the ultimate origin of these rearrangements has been a mystery: where (in which cell types) and when (during development) do they arise? Do they arise as a by-product of the normal reshuffling of genes between chromosome copies that occurs during meiosis, the cellular process to produce gametes (oocytes and sperm), or at some other stage in the life cycle?

Now a study led by scientists from the Universitat Autònoma de Barcelona (UAB) and the University of Kent shows that sperm production is key to how regions of the genome are re-organised within and between chromosomes during evolution. In particular, inherited chromosomal rearrangements are associated with physical and biochemical processes that are specific to the final stages of sperm production, after the meiotic cell divisions have completed.

The total sequence of DNA or genome of an individual is folded into a specifically tailored and dynamic 3D chromatin structure within the cell nuclei, that determines which genes are “turned on” and which are “turned off” in each cell type. Gametes are produced by all sexually reproducing organisms through a process called meiosis that involves one round of genome replication followed by two consecutive cell divisions, to leave haploid cells (gametes), carrying only one copy of each chromosome. During meiosis, genes are “shuffled” between the chromosome copies inherited from the mother and father, a process known as genetic recombination. These complex events imply that the genome must be packaged and unpackaged in a precise and highly regulated manner into chromatin.

“Our work shows the dynamics of chromatin remodelling during the formation of male gametes is fundamental for understanding which parts of the genome are located close to each other inside the nucleus, and are therefore more likely to be involved in chromosomal rearrangements, in different moments throughout male spermatogenesis", says Dr Aurora Ruiz-Herrera, Associate Professor at the Department of Cell Biology, Physiology and Immunology of the Institute of Biotechnology and Biomedicine (IBB) at the UAB.

To study genome evolution, the team compared the genomes of 13 different rodent species and “unscrambled” the rearrangements that distinguish them. “This allowed us to work out the genome configuration of the rodent common ancestor and determine the locations of the evolutionary breakpoint regions (EBRs) participating in genome rearrangements”, explains Dr Marta Farré, Lecturer in Genomics at the School of Biosciences in the University of Kent, and co-leader of the study.

“Strikingly, EBRs were associated with regions that are active in later stages of spermatogenesis, when the developing male germ cells are called spermatids. Rearrangements occurring at EBRs were found to break and rejoin DNA stretches that are physically located close to each other in the spermatid nucleus”, says Dr Peter Ellis, Senior Lecturer in Molecular Genetics and Reproduction at the School of Biosciences in the University of Kent and co-leader of the study.

Furthermore, EBRs were not associated with meiotic recombination hotspots – indicating that these rearrangements most likely did not occur during meiosis in either males or females. Instead, EBRs were correlated with DNA damage locations in spermatids.

Spermatids are cells undergoing the final stage of sperm development, after cell division has finished – and the events occurring during this process are male specific. This therefore carries the startling implication that males and females are not equal in terms of their impact on genome evolution. “Of all the rearrangements that distinguish a mouse from a rat, a squirrel or a rabbit, the majority appear likely to have arisen in a sperm cell rather than an egg cell. For me, this shows that the male germline is the overall engine of genome structural evolution” says Dr Ellis.

“We show that developing sperm cells retain a ‘memory’ of previous genome configurations. There are stretches of DNA that used to be part of a single chromosome in rodent common ancestor but are now located on different chromosomes in mouse – yet these still move close to each other and make physical contact specifically in developing sperm cells” says Dr Marta Farré. 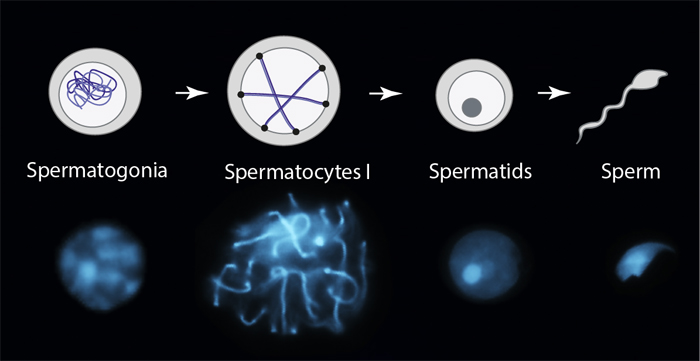 Why in male germ cells?

The authors propose one explanation for their results is the different events that occur during egg and sperm cell production. While both sperm and egg cells reshuffle DNA during meiosis, the DNA breaks created during this process are repaired highly accurately. However, sperm cells also have to compact their DNA into a tiny volume to fit in the sperm head. This compaction causes DNA breaks and uses an error prone method to repair the DNA. Some of these errors can generate genomic rearrangements – explaining why sperm development is a critical factor in genome evolution.

On the other side, a current unsolved mystery is why some species have very stable genomes with few rearrangements, while others have highly dynamic genomes with multiple rearrangements. “Our work suggests that this may be due to the details of where and when DNA is broken and repaired during sperm production” says Dr Ruiz-Herrera.

While the study was carried out in rodents, spermatogenesis is a highly conserved process and therefore this principle is likely to apply widely throughout the tree of life, researchers point out.

Participating in this study led by the UAB and University of Kent were also the research teams from Josep Carreras Leukaemia Research Institute (IJC) and Sequentia Biotech.