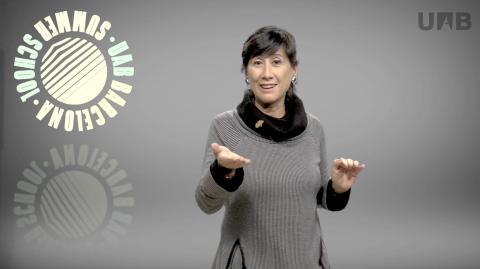 The main objective is to give the participants tools to understand the different aspects of artistic creation and scenic art in public spaces. Urban Performing Arts is a mostly practical course for which attendance is required each day, to realize a final live and direct street performance.
The course has two branches:

From Monday to Friday.

Propaedeutics: Participation and discussion (25%).
Process of creation of the Urban performance: Attendance and participation is required each day of the course (75%).

Participants must bring comfortable clothes and shoes for physical exercises.
White clothes and black shoes for the performance (shirt/skirts/trousers/leggings...).

The course is addressed to everybody who is interested to:

Jaume Bernadet Munnè is an actor, script writer, writer of the screenplay, creative artistic director specialized in  the direction of shows with collective participation. He  has been leading, directing and often presenting as Master of Ceremonies various artistic activities of Comediants all over the world: theatre, audiovisual works, movies, TV, macro shows and special events like the closing ceremony of the Olympic Games of Barcelona ' 92. He has realized different pedagogic projects to transmit the unique artistic language invented by Comediants, with conferences, international workshops, artistic residences and performances such as the International Street Theater Course for FAI AR (Formation Avancée Itinerant des Arts de la Rue Marseille, France).

Rita Kuan (Jin Hua) is a theatre artist: actress, assistant direccion, creation and artistic production, ideation, design and realization of exhibitions, books, objects, story boards for shows and other theatrical events. She studied up until the fifth year of architecture in Florence.  Since 1979 she ‘s a member of the theatre group “Comediants“, participating creatively to all their artistic productions: theatre, movies, TV, macro shows and special events like the closing ceremony of the Olympic Games of Barcelona ' 92, different pedagogic activities to transmit the special artistic language invented by Comediants with international workshops, artistic residences, performances like “Architecture and ephemeral spaces”, for ELISAVA and UPC of Barcelona.

Registration of international and national students (non-UAB students) before May 1st will get 20% discount.

Where the course will take place

If you have any doubt, please contact with us: