A total of 28% of rural land in Spain is exposed to high levels of depopulation, while 45% has problems with aridity, and 17.5 % suffers from both problems according to the ”la Caixa” Foundation's Social Observatory and the ICTA-UAB.

Recently, the rural areas of Spain have undergone unprecedented environmental and social transformation processes, with depopulation and climate change being the most outstanding elements.In fact, 28% of rural land in Spain has been subject to high indexes of depopulation, 45% has problems with aridity, and 17.5 % suffers from both problems.

This is the main conclusion of the study entitled L'Espanya desertificada, conducted by the ”la Caixa” Foundation's Social Observatory and the Universitat Autònoma de Barcelona (UAB) researchers Cara Maeztu, Gerard Pocull, Esteve Corbera and Sergio Villamayor-Tomas, from the Institute for Environmental Science and Technology (ICTA-UAB). 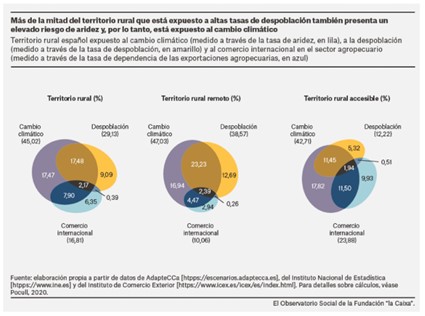 The superposition of maps on the prevalance of depopulation in Spain with maps exposing areas suffering from climate change (e.g., by measuring risk of aridity) allows identifying regions where a double exposure exists.

Given this reality, there are different factors that can mitigate depopulation, such as investing in agribusinesses and renewable energies, rural and environmental tourism, migration, housing availability, cultural offers and rural entertainment, and connectivity with urban areas. Nevertheless, some of these factors could also bring about undesired effects both socially and environmentally. 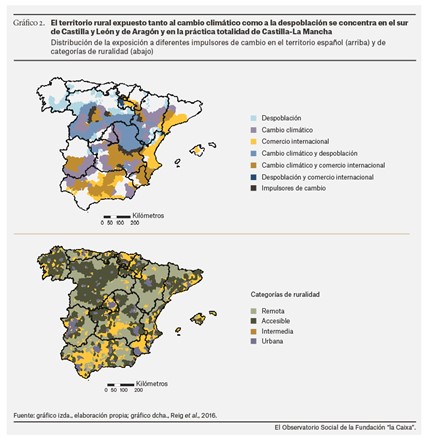 For example, the development of agribusinesses leads to a concentration of farming exploitations and services, which would make it more difficult for young farmers and migrants to have access to land. Similarly, the intensification of farming and livestock rearing could erode the land, overexploit it and contaminate water resources, which would lead to an increase in the risk of aridity and a decrease in the resilience of the land in the face of climate change.