Suicide is a global and severe public health problem affecting all countries and people from all ages. Increased efforts to improve prevention are required because of the progressive increase of its incidence. Different intervention programs aimed to prevent suicide have been created and implemented. In these, the detection of patients at high risk of suicide is one of the key elements to success, and required to optimize the strategies of prevention. However, the detection of persons with high risk of suicide becomes also one of the major challenges, since these do often not express  situation and may not directly ask for help. In the context of a primary care consultation, it can be very difficult to identify them.

In this research we have obtained the information about the 2,109 cases of death from suicide that were certified by Coroners in the Province of Barcelona during the years 2010-2015. We have searched electronic records on their previous interactions with the sanitary system from the available healthcare databases. We have compared their data with that of of persons of similar age, sex and address, in order to identify characteristics that may allow to differentiate, and therefore to identify, the persons who may eventually die by suicide. 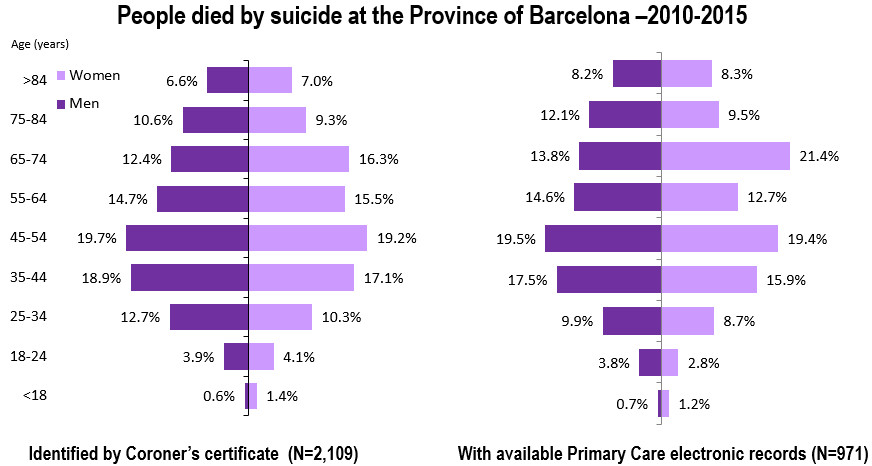 At least 971 (46%) of the persons who died by suicide had Primary Care electronic records which we could retrieve. Approximately 60% of them died during the month following their last contact, and only one of every three of these persons was referred to a Mental Health specialist. Comparing their data with those of 19,420 similar persons (controls), we saw that information on several known risk factors for suicide are often available in the clinical histories of the patients, and these risk factors do associate with increases of risk of dying by suicide, as compared to persons who do not commit suicide.
These risk factors include a previous attempt of suicide, several mental health diagnostics, alcohol and tobacco use, and some sociodemographic variables. We have identified some additional factors that are associated with an increased risk of death for suicide; these include a high frequency of certain interactions with the healthcare system, some situations of sick leave or temporary disability, and certain patterns of use of drugs used to treat mental disorders, such as anxiolytics, or recent discontinuation of antipsychotics or antidepressant drugs, among others.

The main conclusion of the study is that information on many known risk factors of dying by suicide are available in the electronic medical records routinely used in our setting. This represents an opportunity for healthcare professionals to identify persons at high risk of dying by suicide when they are visited, through alerts created by techniques of automatic learning or other means. These may avoid that high risk persons pass unnoticed by primary care, so that they can be helped and receive timely preventive measures when required.