We are pleased to announce that Prof Daniel Pauly, from the University of British Columbia (Canada), will be giving a presentation on “Fish must breathe: An Introduction to the Gill-Oxygen Limitation Theory (GOLT)”. The online seminar will take place on the 29th of June 2022, from 16:00 to 17:00.

Dr. Daniel Pauly was born in Paris, France; he is both French and Canadian and studied fisheries science in Germany, but he spent much of his career in the tropics, notably in the Philippines. Since 1994, he is a Professor of Fisheries at the University of British Columbia, Vancouver Canada, where, since 1999, he directs the Sea Around Us research initiative, funded by a variety of philanthropic foundations, and which is devoted to documenting and mitigating the impact of fisheries on the world’s marine ecosystems. The concepts, methods and software he (co-)developed are documented in over 1000 widely-cited contributions, and have led to his receiving multiple scientific awards. A detailed account of Daniel Pauly’s work and influence may by found in a full-length biography (“Daniel Pauly – un océan de combats” by David Grémillet), published in French in 2019 and in English in 2021 as “The Ocean’s Whistleblower – the remarkable life and work of Daniel Pauly.”

TOPIC of the KEYNOTE

The Gill-Oxygen Limitation Theory (GOLT) is presented to provide mechanisms for key aspects of the biology (growth and its response to temperature, the timing of maturation, migrations, and others) in fish and marine invertebrates (‘fish’). The GOLT’s basic tenet is that the surface area of the gills or other respiratory surfaces of fish cannot, as 2-dimensional structures, supply them with sufficient oxygen to keep up with the growth of their 3-dimensional bodies. Notably, the reduced oxygen supply per body weight induces sexual maturation, and later a slowing and cessation of growth, all accompanied by an increase of physiological processes relying on glycolytic enzymes and a declining role of oxidative enzymes. Because the ‘dimensional tension’ underlying this argument is widely misunderstood, emphasis is given to a detailed, point-by-point presentation of the various component of the GOLT. Aside from having a wide theoretical scope, the GOLT has many potential practical applications, e.g., in optimizing the way fish farmers aerate their ponds, and in predicting how fish populations will react to the warming and deoxygenation of the oceans and freshwater bodies. 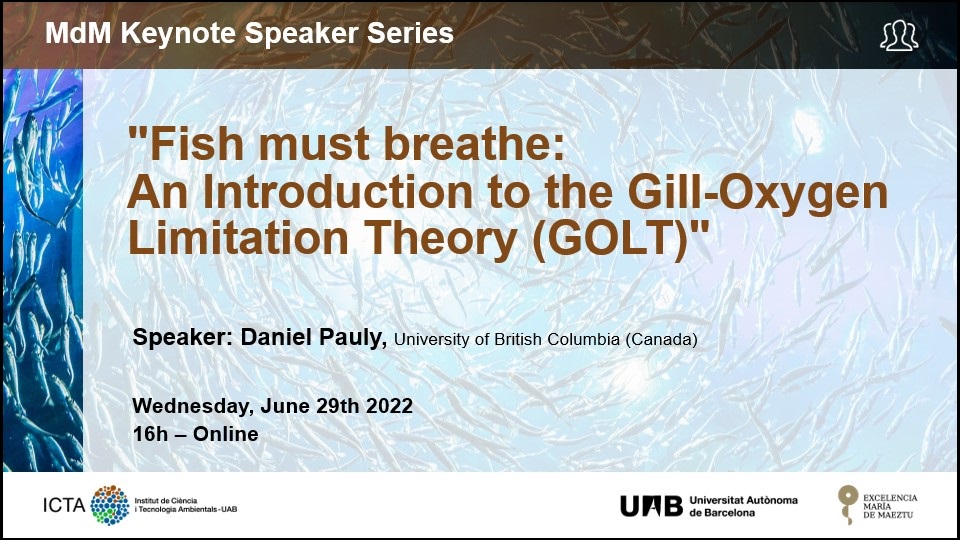