Moroccan theatre during the Spanish Protectorate

This year marks the centenary of the establishment of the Spanish Protectorate in Morocco (1912-1956). This stage of history is still unknown, although it conformed scenarios and it shaped stereotypes and policies still influent to the current Spanish-Moroccan relationships or to migratory dynamics. Undoubtedly, one of the less studied areas of the colonial impact was the development of new public spaces such as theatre and cinema, which were exploited by the urban Moroccan bourgeoisie to express their political demands. At the same time, the stage and the pieces became an important reflection of social changes that were taking place in everyday life in cities such as Tetouan, Larache and Tangier.

From colonial archives and interviews with former players, we can rebuild the relationship of domination, resistance and adaptation that took place between the Spanish colonial administration and the Moroccan nationalist movement. But beyond the political side, the same spaces where representations took place generated great social debate, such as the discussion by Moroccan authorities (judges, scholars and several notables) on the access of Muslim women to theatre. In a hostile environment by the Moroccan governor of the city of Tetuan, the nationalist scholar Tuhami Wazzani challenged that status quo entering into the theatre with his wife, a few years after Turia Hassan became the first Moroccan woman to play a role in woman on stage in 1949. 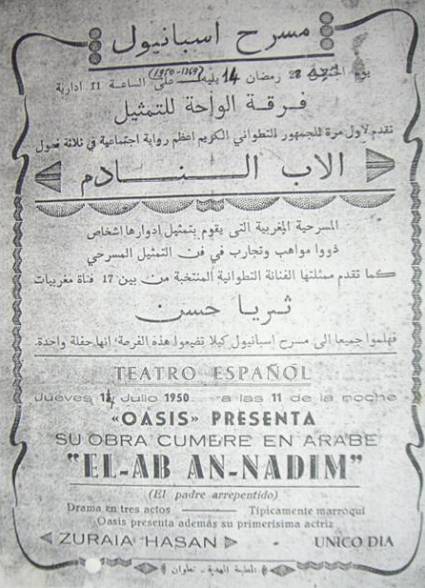 This important step for changes in gender relations was also reflected in the content of many plays that talked about the dilemma of combining the old and the modern; authors and actors representing these works criticized the forced marriage and emphasized the importance of educating the girls for the future nation. So the changes in Muslim societies that are often designed as a very recent phenomenon, have already a history of tensions and paradoxes. In fact, modernity was built simultaneously in the colonies and the metropolis.