Printing Technology is a nascent technique that is evolving from text and graphic printing into a major topic of scientific research and R&D, where it can be used as a highly reproducible non-contact patterning technology to deposit liquid functional materials at high speed on either small or large areas of flexible and non-flexile substrates. It is a low-cost technique because minimizes the waste products and reduces the process steps.

In particular, Inkjet Printing offers great advantages over other print technologies due to its high resolution, and its digital nature (non-use of masks). In addition, the development of organic materials, such as polymers or molecules with electrical characteristics (conductors, semiconductors or insulators), has promoted the manufacturing of new organic printed electrical devices. In fact, these materials present multiple advantages such as: low-cost production, mechanical flexibility, solubility, and can be easily tuned their electrical properties.
Among the different electronic devices based on semiconductors, the diode is a device based on two metallic electrodes which allows the flow of electric current (electrons or holes) in one direction and blocks the movement of carriers in the opposite direction. These devices present great importance because they are part in many electrical systems, one of the most widespread applications is in rectifying circuits, turning the oscillating signal AC into continuous signal DC, which is necessary for the proper operation of most appliances. Currently, one of the devices most challenging in terms of manufacturing are organic printed diodes using Inkjet Printing technology. To date, these devices have been manufactured using conventional and expensive techniques such as: evaporation, oxidation or photolithography for the deposition of contacts, which are responsible for the rectification.
In this context, a work recently published in the journal Organic Electronics, led by the researchers of the National Center of Microelectronics - Microelectronics Institute of Barcelona (Carme Martínez-Domingo, Silvia Conti, Eloi Ramon and Lluís Terés), and in collaboration with an international group of Portugal (Henrique Leonel Gomes), demonstrated for the first time the possibility of manufacturing a low-cost organic diode using only inkjet printing technology. The authors, in this work, have developed a diode composed of an insulating polymer/semiconductor interface sandwiched between two silver electrodes. The rectification properties are due to a leakage current controlled by the voltage applied through the insulator/semiconductor interface. The diodes show rectification ratios of up to 150 at | 10V | and a current density of about 1 μAcm-2. The simple fabrication process of the diodes also makes it advantageous for large-scale production. 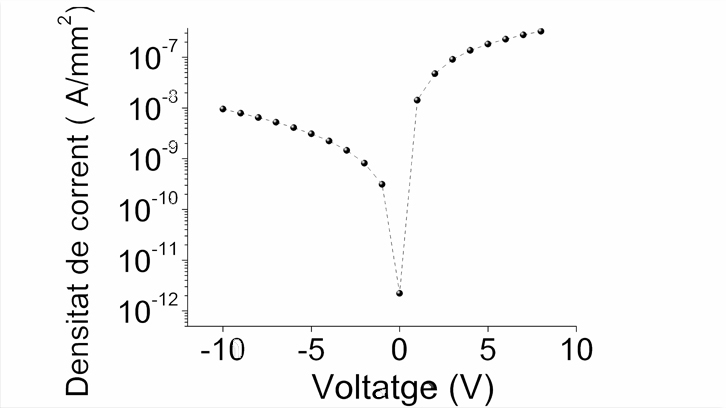