The immune system (IS) is composed by many types of cells and molecules disseminated by the body. The main function of the IS is to detect molecules from pathogens or modified self proteins (in the case of tumor cells) and eliminate them. When the IS recognizes self molecules as foreign molecules, autoimmune processes develop, which can derive in autoimmune diseases. Molecular targets of certain autoimmune disorders are proteins with tissue-restricted expression and T lymphocytes are often involved in the immune response. Precursors of these cells are generated in the bone marrow and mature in the thymus, where a vast repertoire of mature T lymphocytes is generated. These cells travel in the bloodstream, going to the secondary lymphoid organs looking for pathogens.

One of the most important features of T lymphocytes must be that the activation only occurs in the face of foreign or altered molecules. Most individuals do not develop autoimmunity due to the thymic central tolerance mechanisms, where possibly dangerous immature T lymphocytes (thymocytes) are eliminated. To generate tolerance, major histocompatibility complex (MHC) human leukocyte antigen (HLA) molecules present many peptides derived from self proteins to thymocytes. If high affinity interactions occur, thymocytes will die by apoptosis.

However, some individuals contain lymphocytes that recognize self molecules as non-self molecules in specific tissues, inducing an autoimmune response, suggesting that they were not correctly “tolerized” against these proteins in the thymus. Thus, to generate an effective T cell repertoire the peptide sample shown by HLA molecules in the thymus must contain the highest  number of proteins that T lymphocytes will ever encounter in the periphery, including those peptides derived from tissue specific proteins.

The transcription of genes encoding tissue restricted antigens (TRAs) in the thymus is well-known. The presence of the protein had been detected in a few cases. The expression of many of these genes is dependent on the activity of a protein principally expressed in medullary thymic epithelial cells (mTECs). This protein is called autoimmune regulator (AIRE). However, other genes are transcribed in an AIRE-independent manner.

Contactin is a protein reported as a target of the autoimmune attack in multiple sclerosis. One of the main targets in autoimmune prostatitis is the protein semenogelin. Both proteins are expressed in the nervous system and in the prostate, respectively. 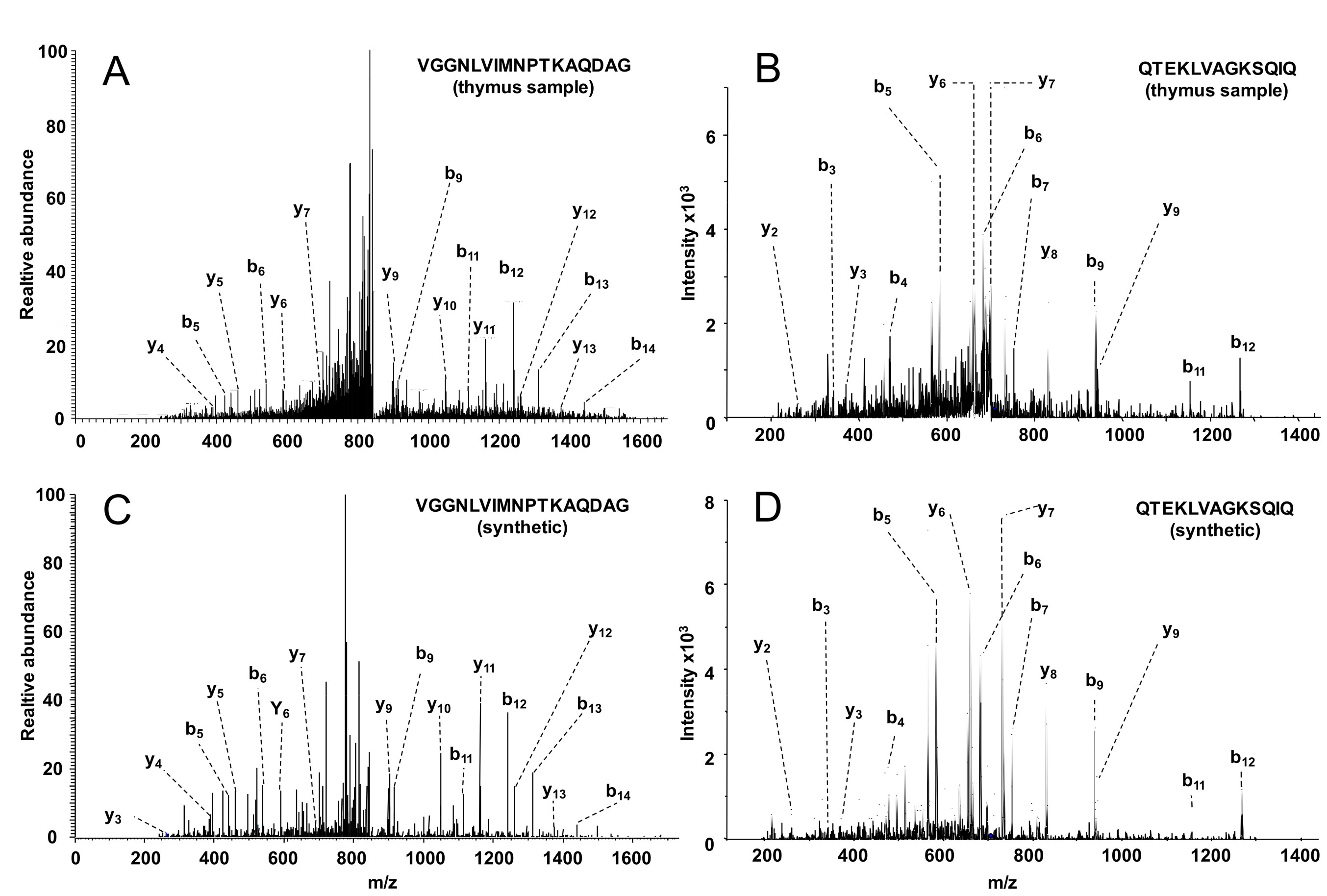 Figure 1: Fragmentation spectraof peptides from autoantigens associated to HLA-DR in human thymus. Spectra obtained from the samples and those corresponding to the synthetic peptides are shown.

In this context, Dr. Dolores Jaraquemada and Dr. Iñaki Alvarez (see previous article in UABDivulga) lead two research lines that converge in the study of the HLA presentation in the thymus. The group, located in the Institut de Biotecnologia i Biomedicina of the UAB, in collaboration with researchers of the Hospital Universitari Vall d´Hebron, the Benaroya Research Institute in Virginia (USA), the German Cancer Research Center (Germany) and the Proteomics Facilities of the Hospital Universitari Vall d'Hebron and the CSIC-UAB have established that some peptides derived from contactin and semenogelin are presented to thymocytes by several HLA-DR allotypes in the human thymus. Although the transcription of both genes occurs in mTECs, the expression at the RNA level of semenogelin is AIRE-dependent, while contactin is expressed in an AIRE-independent manner.

This study was performed using principally proteomics and genomics techniques and demonstrates, for the first time, that HLA molecules show peptides coming from the catabolism of TRAs, including protein targets in autoimmune diseases.