Carbon-carbon double bond (alkene) formation under mild conditions can be achieved with alkene metathesis. This reaction consists in substituent exchange similar to  couple exchange and has become a powerful synthetic tool widely used in organic chemistry field, from pharmaceutics to polymers. However, this transformation requires the use of metal alkylidene complexes (ruthenium, molybdenum, tungsten) as catalysts. Many of such compounds are oxygen and moisture sensitive but in the recent years, more robust versions have been commercialized though at high prices.

Even though catalysts are not consumed during the chemical reaction, their separation from the final products is often difficult and, thus, the recovery and reuse of such molecules is highly interesting for economic and environmental reasons. In this context, one of the most widely used strategies consists in the immobilization of the catalyst onto an insoluble polymeric support. This allows an easy catalyst recovery by filtration and a simple purification of the final products.

In this work we have chosen an inorganic support like silicon dioxide (silica or silica gel) because of its good thermal, mechanical and chemical stability. The catalytic properties of the new material come from a ruthenium alkylidene complex (in blue in the Figure) that is permanently bound to the inorganic network through the N-heterocyclic carbene (NHC) ligand. Material M1 has been prepared by sol-gel hydrolysis and condensation between tetraethoxysilane (TEOS) and a well-defined ruthenium alkylidene complex bearing two triethoxysilyl groups. The hybrid silica M1 has been characterized with several techniques and finally it has been applied in alkene metathesis (some examples are shown in the Figure) and one enyne (molecule 9, Figure). 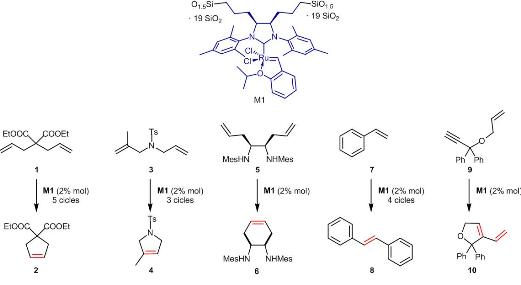 The new supported catalyst provided good yields in difficult substrates like trisubstituted alkenes (molecule 3, Figure). Moreover M1 minimizes the formation of undesired cycloisomerization by-products, it can be easily recovered by filtration and reused in up to five consecutive cycles with a simple experimental procedure under anhydrous and inert conditions.

Our results demonstrate the feasibility of the sol-gel immobilization of suitable functionalized well-defined ruthenium catalysts for alkene metathesis. Indeed, this work represents the first example of such a sol-gel immobilization through the NHC ligand, aiming to contribute to the development of more efficient supported catalysts.