Prescribed burning is a management tool used in a lot of countries like United States and Australia for fire hazard reduction. The technique applies a planned fire in a natural area and under given meteorological conditions (known as prescription window) in order to burn the thinner living and dead fuel load, that is, the vegetal material (dead or alive) smaller than six millimetres of diameter, located in the soil surface or in the shrub layer, that is most combustible and causes higher fire intensities.

Australia is one of the pioneers in the use of this technique, as it is a fire prone continent, as its biota is extremely adapted to fire and Australian aboriginals used it for hunting, farming and heating. European colonization, especially as of the 1850s, brought a new fire regime (how and when fires occurred) as it was used to create open land suitable for farming and grazing, often escaping and becoming large fires. In 1939, after one of the worst wildfires that the Australian Victoria State suffered, known as Black Friday, the Government recommended for the first time the use of controlled burning in order to keep low fuel loads in the forest. In the 1950s, Australia published the first scientific works on the suitability of prescribed burning for fire hazard reduction and also on its ecological impacts in natural ecosystems. However, in the last two decades, a debate in the scientific and technical community has been established on the applicability of prescribed burning for managing large areas. 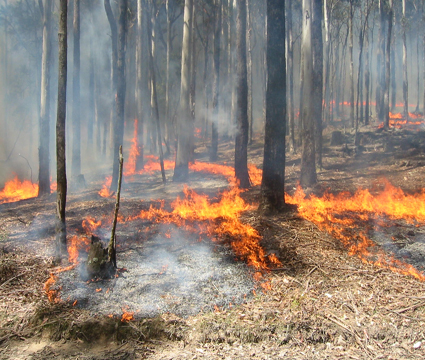 An example of prescribed burning in Australia.

This study revised 576 works published between 1927 and 2007 in scientific journals, books, technical reports, conferences and meetings. Papers were classified according to their objective: works about the use of prescribed burning for management and/or fire hazard reduction in a given location, or works on its ecological effects on flora, fauna or soil. Papers were then classified upon whether they supported prescribed burning or rejected its use. Approximately the same number of studies regarding management and ecology were found. Most works about management justified the use of prescribed burning, but most ecological works did not give a clear position of the adequacy of this technique for ecological conservation. Most ecological works had been carried out in given locations and under site-specific conditions and, thus, cannot extrapolate the results to other areas.

Up to the 1990, most publications were local or regional, that is, their outspread were limited to a given region of Australia. However, this tendency has changed in the last two decades, and the presence of Australian publications in international journals has risen significantly. This study shows that Australia is one of the countries with more knowledge amd with more experience in the use of this technique for forest management, wildfire hazard reduction and for ecological and silvicultural objectives.