The issue of shifting problems has been under-investigated, perhaps because the study of environmental science and policy is divided into so many disciplines and specializations. Models that are good in describing environmental component linkages tend to have a very simple representation of behavioral and economic dimensions, or are missing altogether. This means that it is difficult to trace problem shifting due to behavioral or economic mechanisms. We qualitatively assess the likely environmental problem shifting of three hypothetical energy futures to highlight the possibility that as we resolve energy-climate problems, others may be aggravated.

A business-as-usual (BAU) scenario is an extrapolation of the current situation, with weak policies that do not considerably reduce carbon dioxide emissions and with a serious risk of peak oil leading to rising prices of oil in the long term. The second scenario, cheap solar energy due to innovation policy (CSE), sketches a technological-breakthrough scenario of low-cost availability of solar energy in the short-run, which is the hope of many participants in the scientific and political debates on energy and climate change. It is often seen as a possible consequence of giving much direct support to renewable energy technologies, in the form of public R&D as well as subsidies to private R&D and market applications, and thus avoiding the need of strict environmental regulation – through carbon prices or otherwise. The latter is the focus of the third scenario, expensive fossil energy due to carbon pricing (EFE). Here a gradual rather than a radical improvement in the performance of renewable energy technologies like solar PV is most likely.

The BAU scenario performs the worst in that it magnifies negative environmental impacts and moreover does not generate a favorable economic performance. The CSE scenario shows a more mixed pattern of effects (see Figure 1). Here one can see a clear environmental shifting effect in the sense that climate and ocean acidification problems are likely to be solved while other problems related to pollution, land appropriation, and nutrient cycles may get worse or will not significantly improve, largely because of the economic scale effects of cheap energy. The impact on biodiversity is uncertain and may vary in space. The EFE scenario performs well with regard to all environmental problems. The reason is that here energy efficiency is higher and the scale of the economy is smaller, implying a lower demand for energy than under the second scenario of cheap solar energy availability, and thus less need for renewable energy supply. 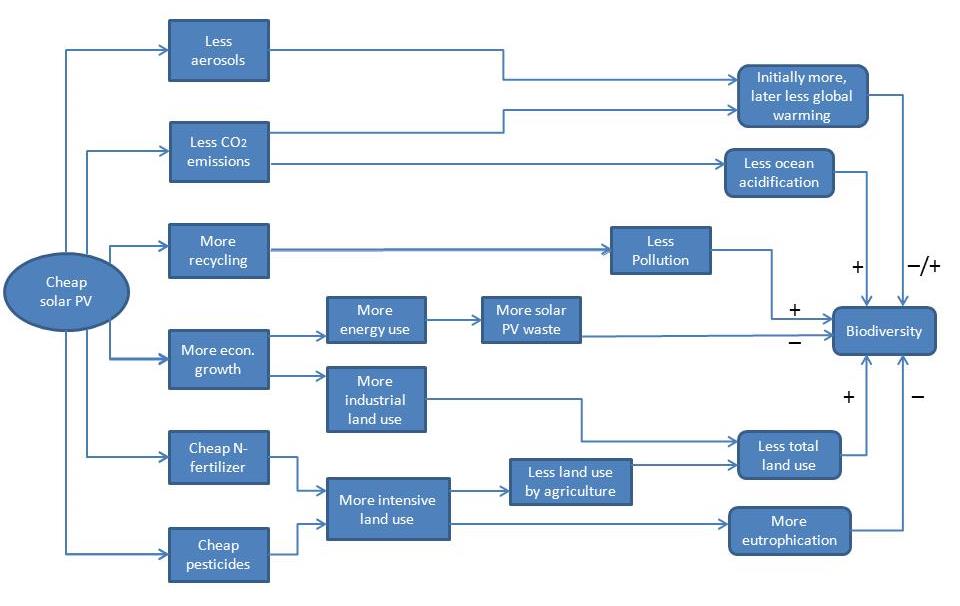 Cheap solar energy means a shift from greenhouse gas emissions with climate change and ocean acidification consequences to land use, biodiversity impacts and chemical pollution. The many socioeconomic mediating factors contributing to this can be summarized as changes in the scale and environmental intensity of economic activities, notably agriculture. We have focused the second scenario here on solar PV as we feel a strong fall in cost due to a technological breakthrough is most realistic for this particular technological option.

To study environmental problem shifting in a more focused and systematic way, we might extend existing integrated assessment models with a module that roughly assesses impacts on the widely recognized nine planetary boundaries (Rockström et al.). A more in-depth analysis of particular environmental problem shifting hypotheses – in biophysical terms as well as mediated by socioeconomic mechanisms – requires a genuine multidisciplinary effort involving natural and social sciences. System dynamics models may need to receive renewed attention as they provide a method that allows to address problem shifting in a complete, continuous, quantitative and balanced way – an idea that goes back to the original Limits to Growth study for the Club of Rome.