It is well known that the Mediterranean climate shows a complex spatial and seasonal variability pattern, exacerbated by the unpredictability of rainfall from one year to the next or within the same year. The changes in precipitation distribution can have negative effects on water availability, producing water scarcity.

The hydrological regime of Catalonia, located in the northeast of the Iberian Peninsula, is characterised by the irregularity of its rainfall pattern typical of the Mediterranean climate. As a consequence of the lack of sufficient rainfall at the headwaters of Catalan rivers from the autumn of 2006, the Autonomous Government of Catalonia signed on 3rd April 2007 the Drought Decree “On the adoption of exceptional and emergency measures regarding the use of water resources” (revoked on 13 January 2009). It was regarded by the Catalan Water Agency, the public water authority in Catalonia, to be the worst drought since 1944.

The adopted measures included reducing the watering of gardens, closing ornamental fountains and controlling the filling of private swimming pools. In the agricultural sector they included the reduction to the minimum of the irrigation supply in regulated systems especially in the Ter and Muga rivers. This situation created many severe conflicts between farmers and water managers in these river basins as reported by the press (“El Periodico”, “El Punt” and “Diari de Girona”, May and June of 2008).

Although a number of studies have analysed the methods to monitor crop water needs, the integration of crop phenological dynamics and irrigation using water stored in reservoirs has received little attention. This paper tries to reduce such gap analysing and comparing the dynamics of certain irrigated crops (maize, alfalfa, fruit trees and poplars) located in two irrigation communities especially affected by the Drought Decree of 2007: the irrigation community of Pals, located near the Ter River, and the irrigation community of the right bank of the Muga River, with less available water resources compared with Pals. As a consequence of the research period, from 2002 to 2008, both years of water surplus and water scarcity were analysed with the objective of identifying different patterns of irrigation. A statistical analysis was applied in order to discover the relationship between crop greenness and wetness, extracted from Landsat remote sensing imagery, and the volume of stored water in two reservoirs: Susqueda, which provides water to the Pals irrigation system and Boadella, which provides water to the Muga irrigation system. 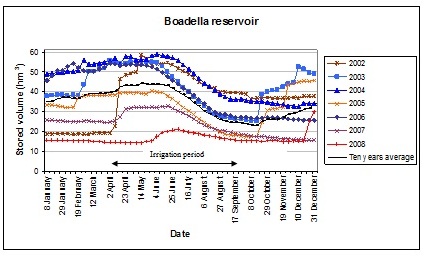 Figure 1: Dynamics of stored water in the Boadella reservoir from 2002 to 2008. Its maximum capacity is 61.1 hm3. Irrigation period: from April to September. Source: Water Catalan Agency.

Results show that both irrigation communities used two methods for water-saving: crop substitution, by decreasing the area of maize (high water consumption) and cropping other types of crops (winter cereals, for example), and timing the crop cycle, delaying or advancing sowing depending on water availability. At the same time, although the irrigation community of Muga is drier in rainfall terms than Pals, a similar crop wetness status was detected and no difference was observed between periods of water scarcity and water surplus. These results are of remarkable relevance for the Catalan Water Agency when managing potential future water scarcity.