The navicular bone of Anchomomys provides new clues about its behaviour

The primates of the Eocene are the first Euprimates (primates of modern aspect) that we find in the fossil record and that are well represented in fossil sites of the Catalan PrePyrenean region. In this sense, Sant Jaume de Frontanyà is a fossil site of reference. Many of the fossils recovered from this site during the last century were never studied but, during the last decade, they have allowed the description and arisal of different new species such as Necrolemur anadoni, Pseudoloris pyrenaicus or Anchomomys frontanyensis, the latter published in 2011.

Eocene primates found in the Catalan PrePyrenean region belong to two different taxonomic groups: the adapiforms (more closely related to extant lemurs and lorises), which belong to the primate group of the strepsirrhines (primates with a wet nose); and the omomyiforms (more closely related to extant tarsiers), which are haplorhines (primates with a dry nose, like humans). Adapiforms and omomyiforms are fossils that have been traditionally poorly studied in the Iberian Peninsula, but they are very interesting from a scientific point of view because they allow us to clarify their phylogenetic relationships with extant primate faunas and to analyze the features present in animals that are at the base of the group to which humans belong.

Recently, in our research* we have analized in detail the navicular bone of the adapiform Anchomomys frontanyensis and the results haven been published in the prestigious Journal of Human Evolution. This small foot bone connects the astragalus (talus, found at the base of the tibia) and the cuneiforms and, up until now, it had not been studied for any Eocene primate of the Iberian Peninsula. The navicular is the third bone studied of the postcranial skeleton of this species, after the astragalus and the calcaneus. 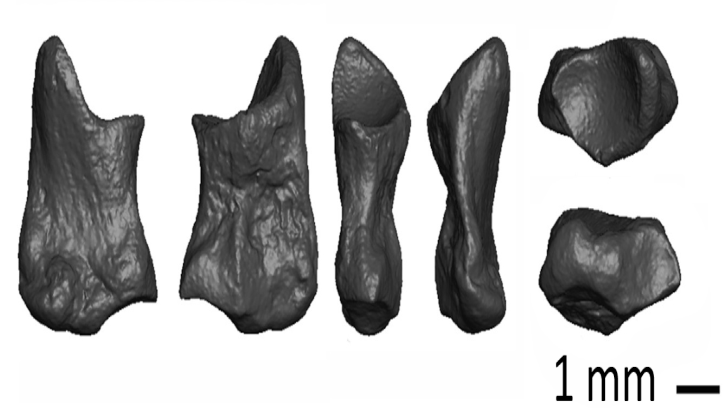 The study of the foot bones of this primate allows us to clarify some characteristics of the locomotor behavior of this species. The navicular of Anchomomys is relatively long, a feature that has been related to the proclivity for leaping in primates. We think that Anchomomys was more agile than other adapiforms, even though it was not specially adapted to vertical clinging and leaping. Its locomotor repertoire was probably similar to that of extant cheirogaleids, a family of small lemurs endemic to Madagascar.

On the other hand, the presence of an articular facet between the mesocuneiform and the cuboides suggests that Anchomomys had an inverted position of the foot (with the plantar side of the foot facing inwards) that would allow these primates to grasp smaller branches better than the omomyiforms. These differences could have facilitated coexistence of adapiforms and omomyiforms in the same fossil sites during the Eocene, avoiding competition between the two groups, and permitting each of the groups to occupy different strata in the canopy.


*Research led by Judit Marigó, ”Beatriu de Pinós” researcher of the research group of Paleoprimatologia and Paleoanthropology of the ICP, a research center adscribed to the UAB, and associate professor at the Paleontology Unit of the Geology Department of the UAB, as well as professor in the Master’s degrees in “Paleobiology and Fossil Record” and “Biological Anthropology” of the UAB.