The Ebro Delta is one of the most important fluvial systems in Mediterranean, and as most of the deltas are subjected to a considerable amount of enviromental impacts. Therefore the integrity of the coastal territory is at risk both because of human pressures and climate change expected impacts, which are likely to lead to further environmental degradation of the rich natural patrimony, to run the risk of social cohesion, well-being, quality of life, and the security in the future.

One of the most important climate change effects, sea level rise, will have serious implications in terms of agriculture, natural resources, tourism, and industry in our case study. The Ebro Delta is already extremely vulnerable because the levels of sediment have been drastically reduced (mainly due to the river regulation) so that coastal fringes have become fragile and the direct hinterland is very near the present sea level. Consequently the population may experience more frequent flooding events. Other serious effects of sea level rise have been resulting in erosion and saltwater intrusion in coastal areas, thus can lead in the future in a greater loss of inhabitable and arable land as well as a serious change (or damages) to ecosystems, suggesting that increasing protection will be essential. 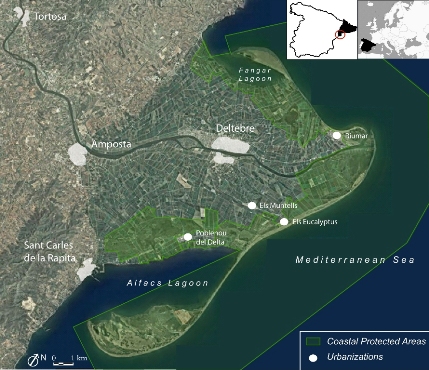 Figure 1: The map shows the locations of the four main towns in the Ebro Delta (where the interviews were done), coastal protected areas and the four urbanizations most threatened from climate change impacts. The insert box indicates the location of the study area with the respect to Catalonia and Spain. Source: from Authors

There is the evidence that until now resource management (rice field monoculture and dams construction) has affected much more the delta area than hydro-climatic factors did. It can also be observed that hydro-climatic factors seem to accelerate the present trends such as coastal erosion, and salt-water intrusion in coastal areas which can have serious consequences in a near future for agriculture production, natural resources and tourism.


In this study, several interviews with local people were conducted. Local people shared their perceptions related to the current situation in the Ebro Delta, along with their vision and adaptation options for the future. There is no single or generic “best option” for adapting to climate change impacts, as each option must be evaluated and treated on its particular merits. However, there are decisive factors in the selection of most appropriate option such as economic cost, technical feasibility, environmental and landscaping impacts, among other factors that will determine the future of the Ebro Delta.

From our research results it seems evident that the best option available for adaptation of the Ebro Delta would be the one that is most in harmony with the nature, as the contribution, consolidation of sand and soil by preserving existing dunes and creating new dunes and wetlands is. Weak tendency among interviewees represent the underwater barriers for decrease saltwater intrusion or the raising ground level options. Additionally, an implementation of accretion of sediment supply could be the adequate option but may not be easily attained unless upgrading of awareness is achieved. From the research is evident a quite wide variation of opinions on building artificial barriers (in the last years the most discussed option), where quite low percentage (29%) of interviewees recommend it. The option of abandoning the area is not at all accepted, neither justified, as the appropriate one. 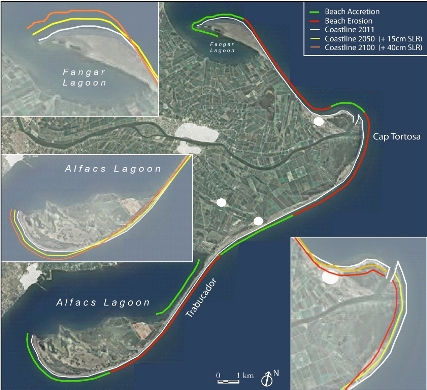 Obviously the options are not mutually exclusive and may be implemented also jointly. Therefore, based on the research of various considerations of adaptation options, a combination of dunes, beach barriers and accretion of sediment supply would be the best option available for protection of the Ebro Delta against climate change effects.
Sandra Fatorić
Sandra.Fatoric@uab.cat