In the late 19th and early 20th centuries, after the discovery the Koch’s bacillus, the social notion of tuberculosis was being replaced by laboratory tuberculosis. In this context, the veterinarian Joaquin Ravetllat i Estech (1872-1923) developed in Catalonia an alternative theory regarding the variability of the tuberculosis bacillus. His ideas, together with the scientific and economic support of the physician Ramon Pla i Armengol (1880-1958), led to the founding of the Institute Ravetllat-Pla, and also to the manufacturing and commercialization of two anti-tuberculosis products: the Suero Ravetllat-Pla and the Hemo-antitoxina Ravetllat-Pla.

Ramon Pla Armengol (second from left) and his colleagues at the Ravetllat-Pla Institute sitting next to a monument to Joaquim Ravetllat.

After Joaquim Ravetllat’s death, Ramon Pla continued the scientific development of the Ravetllat-Pla theory. However, he always combined his political activism with his commercial and scientific activities. Ramon Pla’s political ideology switched in time from a socialist catalanism to an internationalist catalanism, and thus he was a member of different political parties, to be finally elected as representative for the Catalan Socialist Union in 1936. Interestingly, Ramon Pla’s political ideology permeated his scientific theories; Ravetllat’s bacteriological theory allowed him to move away from the social conception of tuberculosis, to re-conceptualize the disease and, in the end, to propose an inclusive therapy through specific pharmaceutical products. 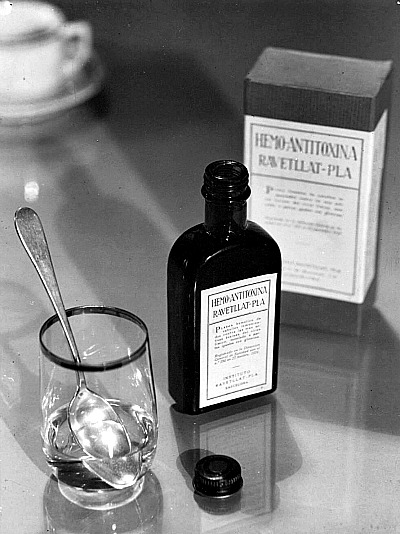 The Ravetllat-Pla theory was defined as heterodox when medical institutions unanimously defined it as not verifiable. Both Ramon Pla’s political activism and the heterodoxy of the theory led to the consolidation of the Ravetllat-Pla Institute as a private company excluded from the Catalan medical community. Taking advantage of this heterodox identity and as a reaction to the subsequent social exclusion, Ramon Pla’s legitimation strategy for the Ravetllat-Pla scientific theory was based on the Institute's expansion in Latin America, where the theory was widely spread through the Institute's publications and advertising.

Pla configured a commercial-scientific network for the Institute that allowed the circulation of scientific knowledge in twenty-seven countries. By using this network, the Institute maintained horizontal relationships with doctors throughout the world, while including the social concept of the disease of each local context in the definition of its medical products. Apart from the contribution to the understanding of the history of medicine and, in particular, of the Catalan pharmaceutical industry, this research provides a new perspective to study the history of drugs: the consideration of these commercial products as a scientific legitimation strategy.