The UAB researcher, Dr. Fernando Novio, and a group of researchers from the University of Santiago de Chile and the Universidad Tecnológica Metropolitana (Santiago de Chile) have developed a series of block copolymers (BCPs) with a honeycomb design using a self-assembly technique known as the breath figure (BF) method. For the synthesis of these materials, polystyrene macroinitiator precursors that had been polymerized with hydrophilic co-monomers (allylmalonic acid, itaconic acid and acrylic acid) had been used as second blocks, or using the technique of radical atom transfer polymerization (ATRP). The objective of the research has been to study the relationship between the composition / surface morphology of the materials obtained and their hydrophobic properties.

BCPs have long been recognized as versatile materials for the development of porous polymer films due to their ability to self-assemble into highly ordered periodic structures (bicontinuous spheres, sheets, cylinders, and complex nanostructures). BCPs are known to exhibit microdomain segregation with surprising complex and periodic geometry, offering endless possibilities for nanoscale engineering, and also for the manufacture of microporous membranes. The versatility of BCPs has made them interesting materials for producing micro / nanoporous systems with potential use in catalysis, nanolithography, and optics. The generation of porous patterns using the BF technique has been largely developed for the manufacture of new functional microstructured materials. In this sense, the size of the polymer domain, the separation between domains and the degree of order are used to identify the impact of the different parameters on the self-assembly process. The morphology and size of the domain are generally controlled by adjusting the length of each block of the polymer, while the molecular weight of the copolymer defines the absolute dimensions of the material. Thus, hydrophobic and superhydrophobic surfaces can be obtained by adjusting the roughness and morphology of the surface.

In this study, self-assembly of the polymers using the BF technique has resulted in the formation of honeycomb microscale patterns by condensation of water droplets (dew formation) during the process. In this sense, the variation in the hydrophilicity of some parts of the block polymer causes different dispersions in the pore diameter and the entropy in the distribution of the pores on the surface, as could be observed by means of scanning electronic microscopy (SEM) and atomic forces microscopy (AFM). 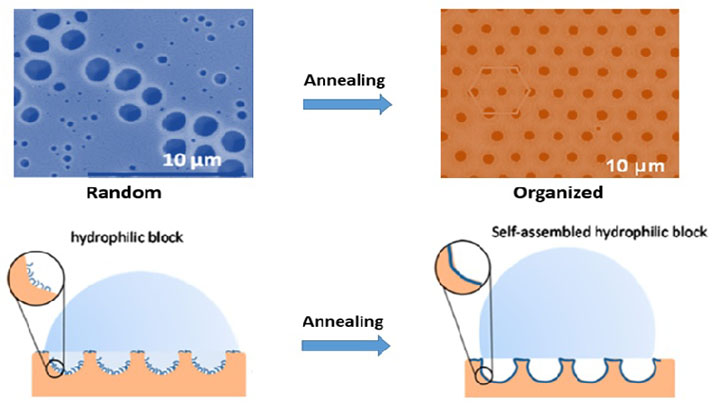 Diagram of the self-assembly of polymers with the BF technique. After the heat treatment it was observed that there was a significant increase in the order and dispersion of the pores that affected the hydrophilicity of the surface.

The wettability of the materials obtained, before and after different thermal treatments, were systematically analyzed, observing that there was a significant increase in the order and dispersion of the pore size after the thermal treatment that affected the hydrophilicity of the surface. Likewise, the effects of the incorporation of polar functional groups in the hydrophilic block, the morphology of the film and the wettability after heat treatment were analyzed using temperatures below the glass transition temperature (Tg). In addition, the properties of surface morphology as well as pore size, roughness, and thickness of the polymer film were analyzed.
The results indicate that surface modifications induce significant changes in some of the mentioned properties, indicating that microstructures tend to self-assemble correctly, showing a rough, porous surface with a pore diameter size ranging from 1.0 to 4.0 μm and 230 nm depth, approximately. Subsequently, the angles of contact with water of the flat surfaces were increased to values greater than 90 °. The post heat treatment results showed a remarkable improvement in the quality and order of the pores within the films, which maintained the properties of the hydrophobic surface. These interesting properties mean that these types of materials can be considered for different potential uses in electronics or optics, or as functional polymers for the elaboration of biomaterials.

This work was possible thanks to the collaboration with Dr. Guadalupe Pizarro from the Chemistry Department of the Universidad Tecnológica Metropolitana (Chile).