New batoid fossil species: a transoceanic migration in the Cretaceous

In the latest Cretaceous outcrops of Fumanya (Vallcebre Basin, Berguedà), fossilized dinosaur trackways, diverse vegetal remains and crocodilian fossils have been found. Recently, the research carried out by Dr. Alejandro Blanco, from the Institut Català de Paleontologia, has also identified the characteristic teeth that evidence the occurrence of Myliobatiform rays in this palaeoecosystem. Most of these teeth can be referred to a new species. The new batoid, named Igdabatis marmii, gets its name in honour of the palaeontologist Dr. Josep Marmi, who has intensively studied the fossil record of this area.

As other chondichthyes (cartilaginous fishes), the skeleton of the rays is not preserved in the fossil record, except under exceptional conditions. For this reason, most of the knowledge about their evolutionary history comes from fossilized dental remains. Concerning rays, teeth have been modified forming dental plates with which they crush their food. Moreover, myliobatid rays show an extreme condition of this adaptation, bearing dental plates composed of a reduced number of enlarged teeth with wider crowns (for a higher crushing efficiency); even getting totally lost in nektonic species.

Another characteristic feature is that rays are generally benthic animal living in shallow waters of the continental shelf. Except for some actively swimming species, such as mantas and devilrays, deep-water zones represent impassable geographical barriers. For this reason, rays are considered good palaeobiogeographical indicators: the common occurrence of the same taxon in different landmasses is the result of a geographical connection, whereas endemism points geographical isolation.

The new species Igdabatis marmii is closely related to another species found in the latest Cretaceous of Niger (Igdabatis sigmodon), and with other discovered in the latest Cretaceous of India (Igdabatis indicus), both of them continents of the southern hemisphere at that time. However, this new species is chronologically older compared to the other two already known. According to this study, these groups of myliobatid rays originated in the Iberian Peninsula during the early Maastrichtian (71 million years ago). But 67 million years ago they migrated, first to Africa, from where they reached India, throughout the continental shelves and arising new descendant species in these new landmasses. Unfortunately, all Igdabatis species became extinct 66 million years ago, at the same time that dinosaurs did. 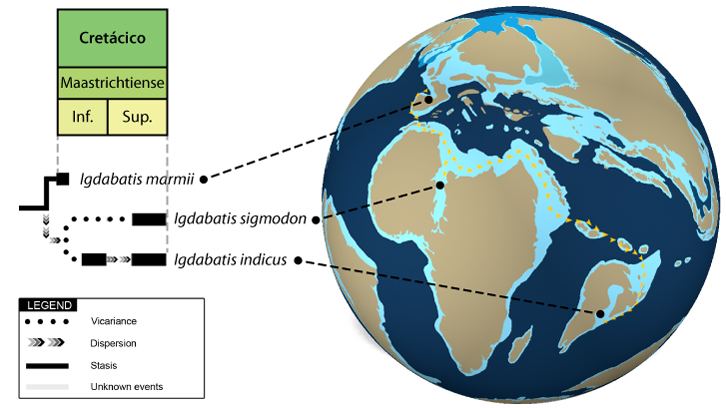 Figura 1. Evolution and dispersion of Igdabatis across different landmasses at the end of the Cretaceous (Alejandro Blanco, CC BY-NC-ND 4.0).