Organosilicas are hybrid materials combining an inorganic fragment (silicon dioxide) with an organic component. Owing to their chemical properties and as well as their thermal and mechanical stability, this type of materials has been applied in a great variety of fields such as optics, electronics, sensors, membranes or catalysis. The sol-gel process is one of the most widely used strategy in the preparation of organosilicas since the reaction occurs under mild conditions which preserve the fragile organic fragment. In the sol-gel process (Figure 1) water molecules attack the precursor (hydrolysis) and the resulting intermediates condense forming small polymer chains (oligomers, sol) that later crosslink to build up a 3D polymer network (gel). At the end of the process, the solvent is removed through a thermal or mechanical treatment yielding the final solid material.

Nanostructured materials (1 nm = 10-9 m) have attracted the interest of scientists since the studies at this scale allow not only a better understanding of materials but also the improvement of their properties through the control of the organization at molecular level. This kind of control can be achieved during the sol-gel process with a bottom-up approach through self-assembling intermolecular forces between the organic fragments of the precursor. Multitude of weak interactions between organic fragments like hydrogen bond, hydrophobic or electrostatic forces and π-stacking can lead to an efficient nanostructuring in organosilicas.

In this work we have chosen as directing organic fragments molecules shown in Figure 2, which consist in precursors derived from bis- and tris-imidazolium salts (red) bearing mesitylene groups (blue), urea moieties (green) and alkylidene chains of different length (orange). 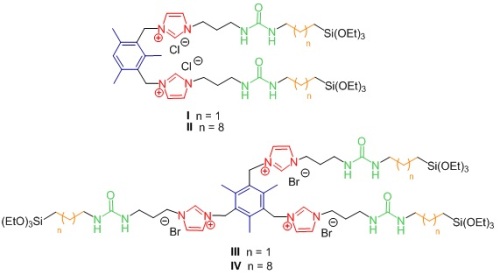 With precursors I-IV we have synthetized several organosilicas with the sol-gel process under different conditions: acidic, alkalin or neutral; in water or in the presence of organic solvents. In order to analyze the organization degree, all hybrid materials have been fully characterized by X-ray diffraction, SEM and TEM electronic microscopy, infrared spectroscopy, nitrogen adsorption and nuclear magnetic resonance. Precursors containing short alkylidene chains (I, III) led to amorphous materials with no self-assembly; whereas organosilicas containing long alkylidene chains exhibited a more regular structure. The best results were obtained with precursor IV (Figure 2) capable of inducing long-range organization under all conditions studied, even in basic medium. From the experimental data, we have proposed a bilayer structure in organosilicas derived from IV, where the tripodal oriented organic fragment with coiled alkylene chains would form hydrophobic layers separated from the hydrophilic siloxane (Si-O, Figure 3). 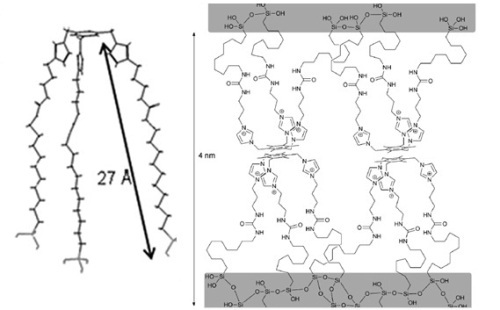 Figure 3: Proposed structure of the material derived from precursor IV.