Nanoplastics in biosensors for detecting histamine in wine

Molecularly Imprinted Polymers (MIPs), also called nanoplastics, are plastic polymers synthesized that act as artificial receptors to bind specific analyte molecules, so-called templates. After the synthesis the template is removed and tailor-made cavities are created, those can act as specific receptor in the polymer insets.

This research, done in the Sensors and Biosensors group (GSB) from the Department of Chemistry at the Autonomous University of Barcelona (UAB), reports the integration of the above-mentioned polymers in graphite epoxy composite sensors (GECs) for the analysis and determination of histamine in wine samples.

Histamine is a chemical compound which belongs to the family of biogenic amines. These compounds can be found in foods and beverages and are associated to their microbiological degradation. The presence of these species can be used as a control parameter to monitor the quality, storage and hygienic conditions of several types of foods and beverages.

With the aim of characterizing these materials, first, scanning electron microscopy (SEM) and confocal microscopy studies were performed. From the obtained SEM images, the dimensions of the polymer particles and its placement on the surface of the electrode were obtained. From confocal microscopy we confirmed that the MIPs captured the template molecule more efficiently than the NIP, which partially fulfilled the purpose of our work. It should be emphasized, that at this point, while preparing the MIP (molecular imprinting polymers), the NIP (non-printed polymer) was also prepared, which is basically the same synthesis only not incorporating the template molecule. NIP serves as a control material regarding the degree of specificity achieved with the MIP.

As for the response and quality of the results of histamine analysis in wine, once the MIP was integrated on the sensor, the reproducibility and the repeatability of measurements were studied, that is, if the sensor responded consistently and permanently over time without losing acceptable response within statistical margins. Other optimized parameters for the analysis were the pH, the contact time for the capture of histamine, the nature of the dissolution in which the measurements were made and finally the calibration curves that allowed us to detect the amount of substance that we can determine within the margin of allowed error.

Another study performed was the discrimination power of histamine versus analogous molecules or potentially interfering species, substances that we could find in the wine matrix; this characterization was made with the help of multivariate analysis. 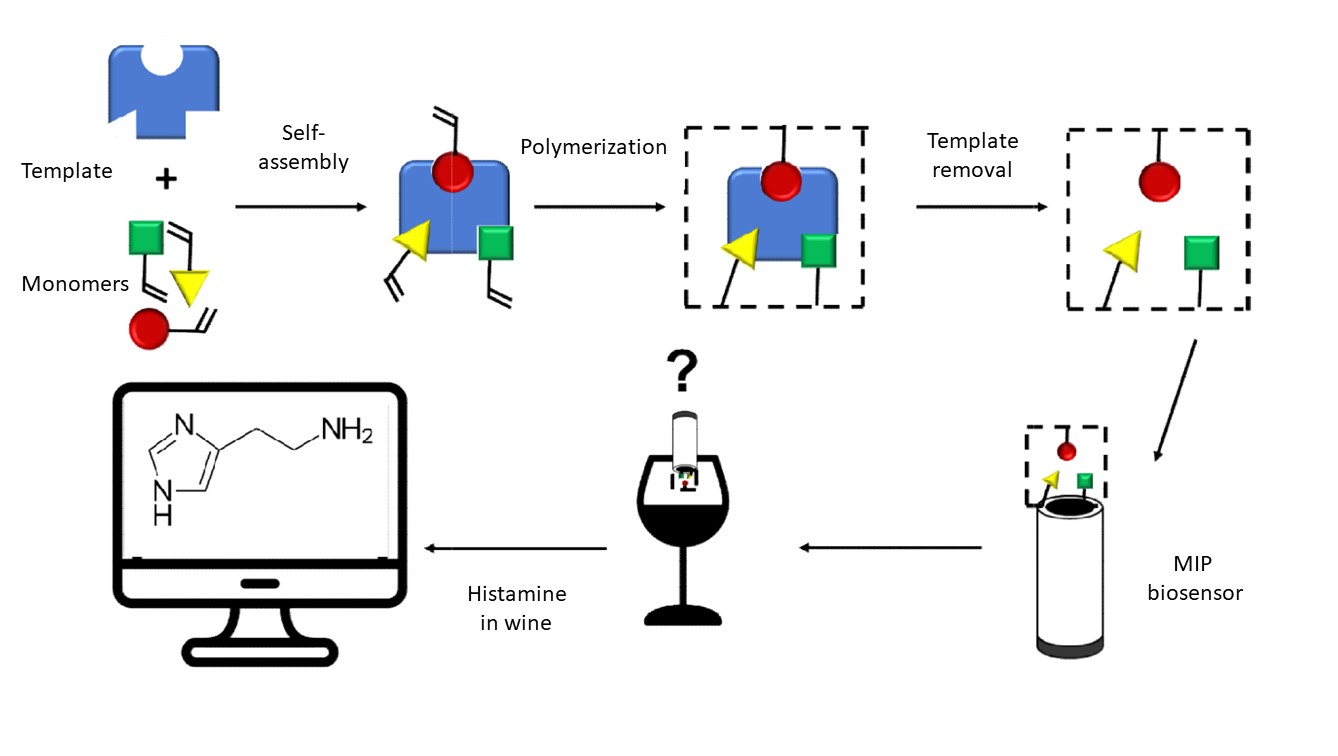 The final goal of our work was the use of this biosensor for the determination and quantification of histamine in wine, the aforementioned application was made and a comparative study was performed between the results obtained with the developed sensor, and those of a reference method, an optical method based on the fluorescence technique. The comparison showed that there were no significant differences between the two methods, thus validating the biosensor-based procedure using MIPs for histamine detection in wine.