Legitimacy of science and commercial interests: the Institute Ravetllat-Pla

Besides the controversy in Spain about Jaime Ferran i Clua's Anti-alfa vaccine and Calmette and Guerin's BCG during the first third of the 20th century, the veterinary Joaquin Ravetllat i Estech developed in Catalonia an alternative theory on the tuberculosis etiological variability. His ideas, together with the scientific and economic support of the physician Ramón Pla i Armengol, became fundamentals not only for founding the new Institute Ravetllat-Pla, but also for the fabrication and commercialization of two anti-tuberculosis products: the Suero Ravetllat-Pla and the Hemo-antitoxine Ravetllat-Pla. European hegemonic science was, however, committed to the mono-causality of Koch's bacillus. Therefore, Ramón Pla i Armengol was forced to expand his market to Latin America, generating a wide scientific and commercial network in approximately twenty countries from Latin America and Europe, including Portugal and Belgium. Through local commercial agents, the Institute not only distributed its products, but also spread its scientific ideas in scientific publications, including the journal published and edited by the Institute and entitled La Clínica (1924-1936).

The Institute Ravetllat-Pla became a corporation with a strong international projection, mostly thanks to the constitution and consolidation of a solid scientific and commercial network. This favoured the sale of their products, which embedded Pla i Armengol's scientific and ideological principles, and the survival of the Institute until 1980. Such a network model became crucial for exchanging ideas and constructing and developing knowledge. This case study will contribute to better understand historically how industries constituted an important mechanism for scientific legitimacy. Moreover, it will provide evidence of how both market economy and the legal and political definition of consumer products, specific from each country, are significant aspects in the making of science. 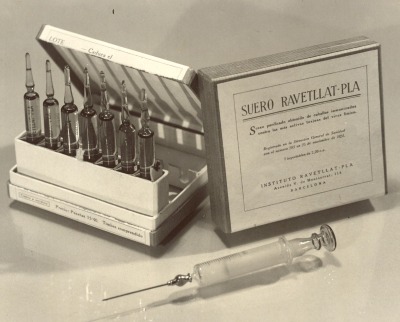