In recent years, nanomaterials have been widely employed for a variety of applications associated with material and computer sciences, medicines, and engineering, among others. Gold nanoparticles, in particular, have been extensively used in nanotechnology applications, especially in biomedical, cosmetic and pharmaceutical, with a valued global market of approximately 4.86 billion USD in 2020 and expected to grow over the next four years at a compound annual growth rate of 25% (https://www.grandviewresearch.com/industryanalysis/gold-nanoparticles-industry).

With the ubiquitous and raising volume of international trade, nanoparticles are expected to reach the aquatic ecosystems as a result of manufacturing processes, use and waste elimination with potential effects to aquatic organisms. Even though the hazard nature of gold nanoparticles is not well established, the potential impact of nanomaterials on fish and other aquatic organisms has become a growing concern.
Based on previous findings of the research team that gold nanoparticles induced some negatives effects in Sparus aurata, commonly known as Gilthead sea bream, it was considered highly important to increase research and evaluate the effects of these NPs in the gills of sea bream. Why gills? Because it is (together with skin) the first organ to be exposed, to waterborne contaminants. In fish, gills are involved in respiration and osmoregulation and are also an important immune organ where an increase in immune responses to stress conditions (e.g. contaminants) or pathogens (e.g. bacteria) can be observed. Moreover, gills have a wide surface area and eventually permeability to waterborne contaminants. Thus, its transcriptional analysis can provide an early sign of possible toxicity caused by gold nanoparticles.
Therefore, fish were exposed to different concentrations of gold nanoparticles, with two different coatings on their surface: AuNP-citrate and AuNP-polyvinylpyrrolidone (PVP) to assess the molecular responses of the gills of gilthead sea bream after short-term exposure. These coatings are commonly used in industry to stabilize gold nanoparticles and may cause different responses in fish. The tested endpoints aimed to evaluate responses associated oxidative stress (common mechanism of toxicity of contaminants) and innate immune response of the fish.
The obtained data showed that fish gills may be an important target for waterborne nanoparticles. The two coatings elicited different expression patterns, inducing an increase in the mRNA levels of antioxidant and inflammatory genes, although suppression of other antioxidant enzyme genes was also found. Thus, data show that gold nanoparticles may be able to alter the oxidative status in gills but endpoints associated with damage should be quantified allow a deeper understanding of their impacts and degree of danger.
These results justify further studies to assess the safety of the particles for further application in industries associated with food production and animal welfare (e.g. aquaculture). 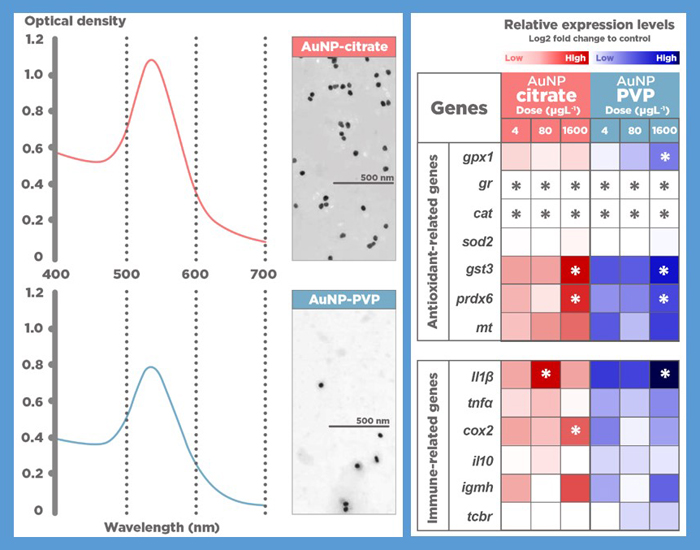