In recent years, the increasing concern for the carcinogenic effect of solar ultraviolet radiation has raised the use of sunscreens. In fact, nowadays ultraviolet (UV) filters can be found in many products, ranging from creams and make-up to shampoos. Due to this high consumption, an increase of the presence of these compounds in the environment, where their toxic effects are still uncertain, has been detected as well.

But, how do these chemical compounds enter the environment from the personal care products that we use? There are two main ways: a direct entrance through the swimming activities in seas, rivers and lakes, or indirectly through the wastewater treatment plants (WWTP). These contaminants arrive to the WWTPs, that are designed to eliminate organic matter, nitrogen and phosphorus but not to degrade this kind of compounds, in the urban (e.g. when having a shower) or industrial wastewater effluents. Thus, UV filters and pharmaceuticals, pesticides and other emerging contaminants pass almost unaltered through the WWTPs and are released to the environment in the liquid effluent or adsorbed in the sludge (figure 2). The problem increases if the sludge is further used as fertilizer in agriculture or in land recovery, for example. 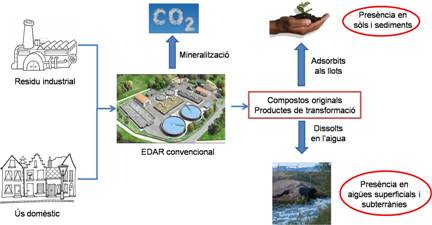 Figure 2. UV filters cycle (and of all emerging contaminants in general) from their use and/or production to the environment

In order to avoid the release of these compounds, including UV filters, to the environment, effective, cheap and sustainable processes, being alternative or complementary to the conventional WWTPs, must be found. These treatments should remove the contaminants from both the liquid phase and the sludge. One alternative could be the use of ligninolytic fungi. These fungi are those living in the trunk of trees (figure 1), so they are adapted to lignin degradation in order to gain access to the nutrients they need. Taking into account that lignin has a very complex structure with aromatic rings, the enzymatic system of these fungi is very unspecific and it has a high oxidation potential. That confers them the ability to degrade also a wide number of xenobiotic compounds (synthesized by humans, not found naturally) which other microorganisms cannot.

In this work, the degradation of several UV filters in sewage sludge where the ligninolytic fungus Trametes versicolor was added (in a process called bioaugmentation) was monitored. Excellent removal yields were obtained, with degradation percentages between 87 and 100%, with initial concentrations in the range of 60 ng/g up to 8 µg/g. However, not only degradation has to be determined but also decrease in the toxicity, because sometimes it can increase.

Figure 3. First steps in the degradation pathway of the UV filter 3-(4-metilbenzilidene) camphor (4-MBC), corresponding to an hydroxylation by cytochrome P450 and the subsequent conjugation with a pentose.

In this study, estrogenic and dioxin-like activities were monitored. Then, one of those UV filters, 3-(4-metilbenzilidene) camphor (4-MBC), which showed the lowest degradation percentage, was studied individually in liquid media. The main degradation pathway in fungi was found to be the same than in humans, hydroxylating the molecule with the enzyme cytochrome P450 and the subsequent conjugation, in this case with a pentose, to diminish the toxicity of the compound and to increase its bioassimilation (figure 3).

Finally, it can be concluded that the treatment with ligninolytic fungi is a promising strategy for the treatment of sewage sludge in order to degrade the emerging contaminants. However, it is a process under study and, therefore, its application is a long-term issue.