Life on earth as we know it today, with just a few exceptions, is based upon the transfer of the hereditary traits through DNA, the molecule acting as the main repository of genetic information. The DNA molecule is made out of the combination of four different building blocks, commonly known as deoxyribonucleotides which, in turn, depend on the activity of a family of proteins termed Ribonucleotide Reductases (RNR). In this respect, RNR proteins are essential for any living organism.

The first DNA organisms inhabited an oxygen-free atmosphere and, therefore, the initial RNR enzymes were designed to be fully functional under such conditions. Upon the advent of photosynthetic organisms oxygen became predominant, and life on earth had to evolve novel enzymes adapted to the newer environmental conditions. This led to the generation of the first aerobic RNR proteins, which are currently found among all higher order organisms. However, and despite the higher efficiency of these novel enzymes, some bacterial organisms never renounced growing under anoxic conditions and their genomes currently contain the genetic information to produce oxygen-dependent enzymes as well as those needed to grow whenever oxygen is missing. Nevertheless, the simultaneous synthesis of two enzymes involved in the same process but active under opposite environmental conditions requires an amount of energy that bacteria cannot afford to consume. In order to solve this inconvenience, bacteria have developed strict genetic regulatory systems that allow them to activate or repress enzyme production upon shifting oxygen concentrations. 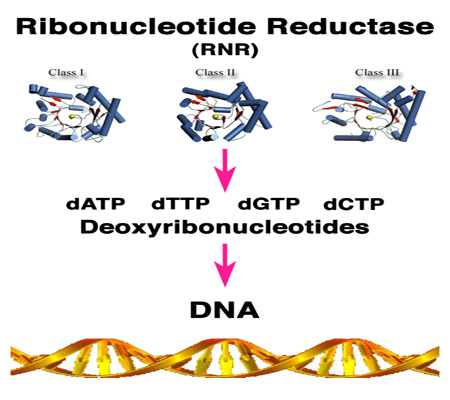 The RNR are essential for the existence of all living organisms.

At the laboratory of Bacterial Molecular Genetics, located within the Institut de Biomedicina i de Biotecnologia of the UAB and under the supervision of Dr. Isidre Gibert González, we have studied these mechanisms of genetic regulation on the enteric bacterium Escherichia coli, a human pathogen responsible for many diverse infections. Our work has shown that synthesis of the anaerobic Ribonucleotide Reductase enzyme within this bacterium is under direct control of a protein sensing oxygen concentration (termed FNR). Whenever oxygen is missing, this protein binds to DNA and activates the synthesis of the anaerobic enzyme. In addition, the FNR protein is able to respond to subtle variations in oxygen concentration by modulating the amount of synthesized RNR, therefore optimizing bacterial resources.

Understanding the genetic regulation of bacterial essential enzymes might be of key importance in order to design specific antimicrobial drugs to restrain bacterial proliferation through the course of an infection.