Biological invasions are one of the major threats affecting biodiversity worldwide. Exotic plants can strongly affect the composition, structure and functioning of the invaded ecosystems. Not all species introduced into new habitats, however, finally form stable populations and become successful invaders.

To improve management of future introductions, scientists are trying to understand what ecological traits are related to successful invasions. The most frequently invoked hypothesis explaining the success of invasive plants is the “Enemy release hypothesis”. This hypothesis predicts that exotic plants, during the invasion process, will lose the consumers associated in their area of origin, experiencing immediate benefits in leaf biomass, reproduction and survival which may facilitate invasion.

The Chemical Ecology and Toxicology laboratory at Universitat Autònoma de Barcelona studies the role of plant herbivores as determinants for invasion success in the exotic shrub Senecio pterophorus, an alien first found in Catalonia in 1982 near the Ripoll River (Sabadell, Barcelona). S. pterophorus is native to eastern South Africa and an invader in western parts of South Africa, Australia and Europe. In Australia, S. pterophorus is highly invasive and is considered a noxious weed subject to eradication. Additionally, it has been recently incorporated as an invasive species into the list of exotic species in Catalonia EXOCAT (2012).

In the present study we determined whether the exotic populations of S. pterophorus experienced lower levels of herbivory compared with plants from the native area, as predicted by the Enemy Release hypothesis. We traveled to South Africa, Australia and Europe, covering the entire known worldwide distribution of S. pterophorus, to evaluate the amount of insects feeding in situ on this species. 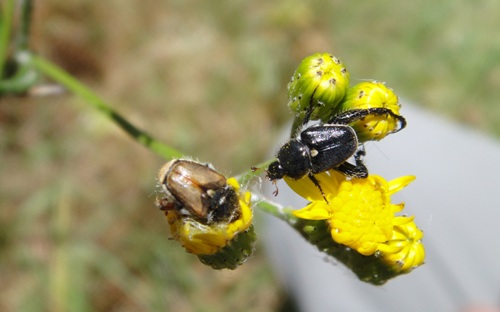 We found that plants from the native area in South Africa had one-quarter of the flower heads damaged by several insect species of Coleoptera, Lepidoptera and Diptera. Plants growing in the introduced areas experienced a complete release from their native fauna, but they later established new interactions with local herbivores present in the area of introduction. Despite these novel associations, plants from Australia and Europe globally experienced a lower seed predation compared with plants from the native area, which is in accordance to the Enemy release hypothesis.

This study is the first to provide strong evidences of reduced herbivory after plant invasion in a biogeographical survey across the entire distributional area of a species. Exotic populations of S. pterophorus freed from insect attack could have an advantage over other native plant species from the invaded ecosystems, thus favoring invasion success.