The increasing social awareness of the need to respect the Environment in order to preserve ours own existence has promoved the development of monitoring systems in the last years. These systems serve to control, for example, the purity of natural waters, especially near possible pollution sites, like industries, cities, etc. The analytical monitoring is defined as the continuous or periodic obtaining of chemical analytical information from a determinated material system or process.

The researchers of the Sensors and Biosensors Group, from the Department of Chemistry, have been working with analytical systems, called electronic tongues, which are capable of providing analytical information in real time and in-situ. For this reason, they are especially useful in the monitoring of chemical species. In a basic way, the electronic tongues consider a set or array of sensors with crossed selectivity, not a single sensor, and tools of multivariate calibration, like the artificial neural networks, to extract the useful information.

A recent work performed by Manuel Gutiérrez under the direction of the doctor Manel del Valle was published in the specialized International Journal of Environmental Analytical Chemistry. This study explores the possibility of using different potentiometric electronic tongues in environmental monitoring applications with remote data transmission through radio-frequency. This research was realized in collaboration with researchers of the Centro de Investigación y Estudios Avanzados from Mexico City.

The first application consisted on the simultaneous real-time determination of the concentration of NH4+, K+, Na+, Cl- and NO3- ions in a tank that simulated the natural conditions of biodegradation. The main objective was to follow their evolution when a concentrated fertilizer was added to the tank. 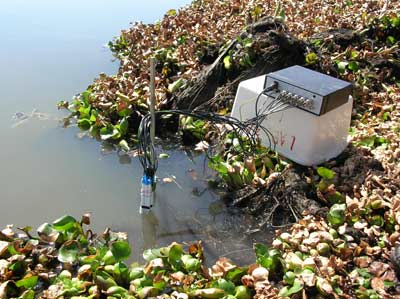 The second application consisted on the simultaneous real-time determination of the concentration of NH4+, K+ and Na+ ions directly in the Ignacio Ramírez dam (Mexico). In both cases the effect of the temperature, which alters the response of the potentiometric sensors, could be offset. Moreover, the data transmission worked without problems, demonstrating the feasibility of the electronic tongues as remote automatic monitoring systems.