Plastic waste in the marine environment and its impact on aquatic life is currently a major concern due to the large quantity of plastic debris released into the oceans. Once in the water, large plastic debris degrades through biotic and abiotic processes, reaching nano-sized particles, also known as nanoplastics (<100 nm) (NPs). With a decrease in size, plastic particles become more bioavailable to aquatic organisms, and potentially more hazardous. Due to their nano-scale properties, NPs may be easily ingested by organisms, penetrate tissues and bioaccumulate in organs and tissues. Moreover, NPs can be taken up by organisms from the environment through direct ingestion as well as pass through the food chain via trophic transfer, affecting the final consumer. NPs have been reported to induce oxidative stress, immune dysfunction, teratogenic effects, and altered locomotion. Furthermore, altered lipid metabolism and histopathological changes in liver of fish exposed to plastic particles have also been reported.

In our study, born from a collaboration between Universitat Autònoma de Barcelona and the University of Aveiro, juvenile Dicentrarchus labrax (European sea bass) individuals were exposed to a concentration range of nanoplastics, with the objective of evaluating the effects of NPs on D. labrax at different levels of biological organization. European sea bass is a top predator marine fish species, as well as a valuable aquaculture species in the Mediterranean area. Therefore, it may be exposed to NPs via water and/or through the food web therefore constituting a potential risk to human consumers. In order to answer whether this poses a hypothetic risk, transcriptional levels of target genes associated with lipid metabolism, immune function and cellular stress were measured in the liver, and biochemical biomarkers related to lipid metabolism, oxidative stress and liver health status were determined in plasma and skin mucus.

Overall, results showed that NPs can alter molecular signaling pathways related to lipid metabolism in sea bass (Figures 1 and 2). Moreover, a significant decrease in enzymes that play a relevant role in the natural immunity of fish (esterases and alkaline phosphatases), suggests that the fishes’ immune system might be compromised after exposure to NPs. Considering that organisms might be exposed to NPs during long periods of time, future studies assessing chronic effects of NPs will be addressed. 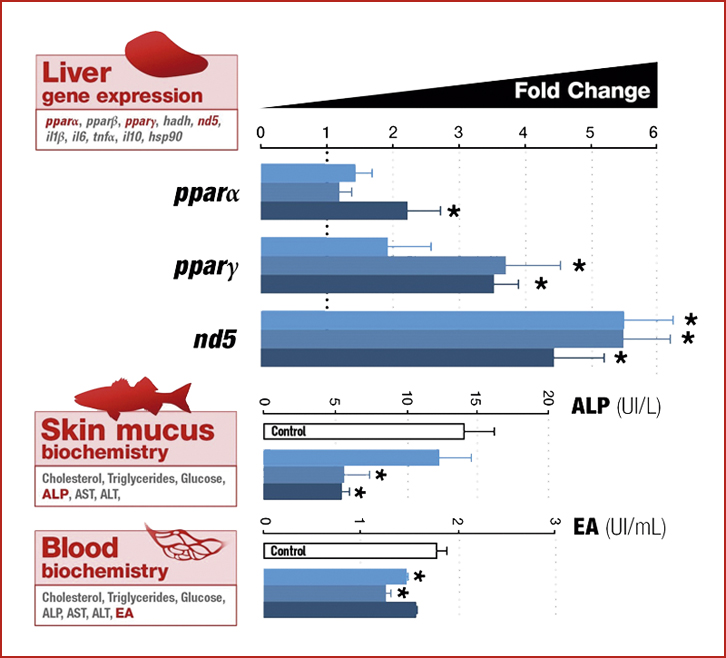