A study carried out by researchers from the National Museum of Natural Sciences (MNCS-CSIC) and CREAF has discovered that the quantity of CO2 emitted from the soil through respiration remains the same despite forest decline after drought. The data show that the soil of a forest with Scots pine (Pinus sylvestris) recovers from damages in very little time; in other words, it has a high resilience in terms of CO2 emissions. However, when the pines are substituted with holm oak (Quercus ilex) the soils emit almost 36% less carbon dioxide through respiration.

Resilience is the capacity to return to a normal state after undergoing a disturbance, for instance a fire or a drought. The study, carried out in the Spanish province of Tarragona and led by CREAF, reveals that the process of tree die-offs due to increased drought in the area does not have repercussions for soil CO2 emissions. “It seems that the soil has the capacity to quickly repair itself following these events,” says Jorge Curiel Yuste from the MNCN.

Contrary to what was expected, the quantity of carbon dioxide released from the soil recovers or remains the same when comparing pines which are either healthy, in bad health, or deceased. “Being a slow process, the gradual dynamics of change allows the surrounding trees, in this case holm oaks, to grow much faster. This way, the trees close to the dead pine grow more roots since there is less competition for resources. In this sense the surviving trees are able to mitigate the effects of drought on soil respiration,” says Josep Barba, CREAF researcher. 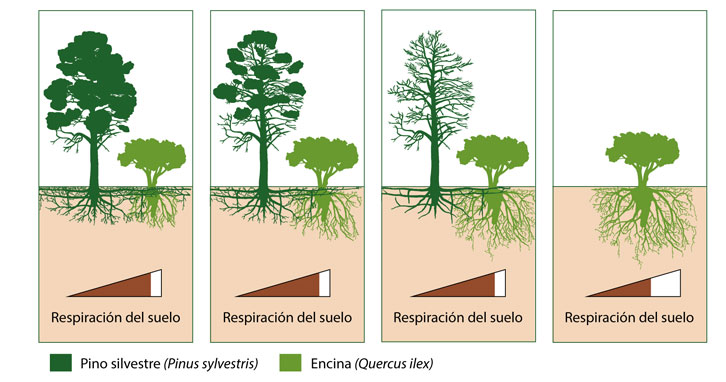 
These results agree with other studies which have also uncovered a high resilience of forests to die-offs caused by forest pestilences. According to Barba, the fact that the forest proves to be so resilient to drought “allows us to be optimistic about CO2 emissions and that, at least from this perspective, climate change will not be worsened”.

“We have confirmed that in the medium term, substitution of pines with holm oak reduces emissions up to 36%, but we still don’t know what the evolution of soil dynamics will be like if the substitute species is different,” clarifies Curiel Yuste, adding, “this effect is specific to the forest of Prades where the study was carried out, and for that reason we need to study the biogeochemical dynamics of the soil of Mediterranean ecosystems, about which very little is known compared to boreal or central European ecosystem soils”.

Considering the greater context in which more die-off episodes due to drought and warming are expected, knowing how the soil behaves with substitutions of certain species with more resilient ones is crucial for understanding forest CO2 absorption and emissions. 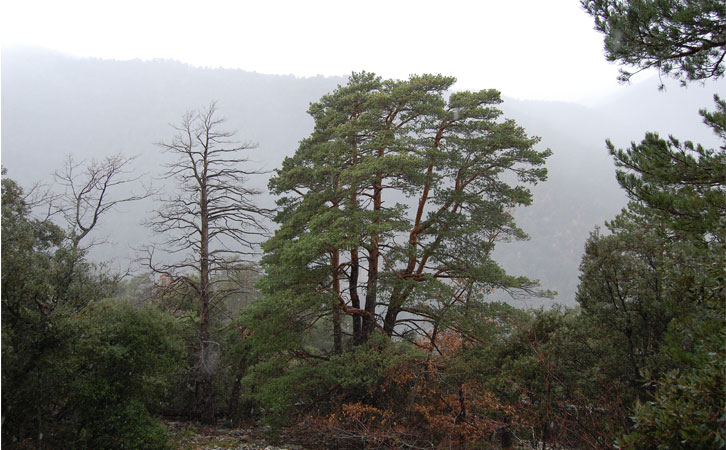 Figure 2: Image of the study forest, incluiding a tree having died due to drought and a healthy tree. Author: David Aguadé.


Forest soils harbor two thirds of forest ecosystem carbon, making them important for study. “More than half of a tree’s life is under ground, but there is an imbalance in knowledge about the above-ground and underground parts”, affirms Josep Barba.