Comprehension of Passive Sentences by patients with Broca’s Aphasia

From the first observations by Pierre Broca and even beyond the first half of the 20th century it was generally believed that Broca’s aphasics suffered from production deficits only. But the research initiated in the 1970s showed that these patients also suffer from comprehension difficulties.

What makes this experiment interesting is the fact that, while actives and passives with an agentive complement have been investigated in many of the world’s languages, passives without the agentive complement have been investigated for a small number of languages, all Germanic, of which only one (English) has the same (relevant) word order properties as Catalan and Spanish. The comprehension of sentences such as those exemplified in (1)–(2) allows us to find out to what extent the underlying syntax of the aphasic speakers differs from that of the healthy population.

We carried out our experiment with 14 patients, 7 in Santa Fe (Argentina), 7 in Hospital de Sant Pau in Barcelona, all affected with Broca’s aphasia (the two groups had a mean age of 51 years). The control subjects were age- and education matched.

The experimental method we used is known as truth value judgment task and consists in asking whether a sentence, e.g. (1) is true of a given graphic representation – in the case of (1), a picture of a child listening to a grandfather (true) or a grandfather listening to a child (false). Each subject was tested on 90 items, 30 per sentence type. Our results appear in the graph. 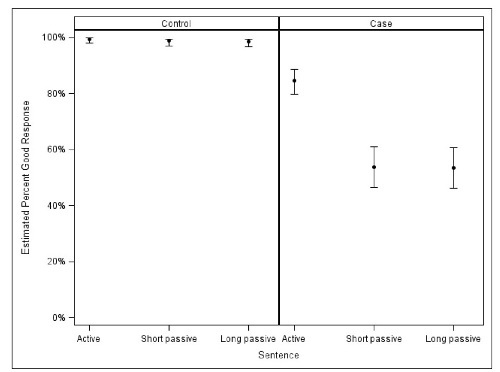 Graph: Performance of control and subjects with Broca's aphasia for the three sentence types.

The results for Catalan and Spanish have been collapsed, since no difference emerged as a function of the language. The control subjects performed at ceiling, but the patients with Broca’s aphasia only understood the active sentences. For passives, their answers were aleatory / performance was not different from chance. This result allows us to conclude that (i) the comprehension deficit of Broca’s aphasics is selective, not general (as already argued in the literature) and (ii) the comprehension deficit affects syntactic passives.

The literature on this last construction shows, for healthy adults, that passives without an agentive complement actually involve an implicit agent (i.e. a syntactically active, but phonetically null argument). To illustrate, a sentence such as “El vaixell va ser enfonsat per cobrar l’assegurança” is well formed because the passive sentence implies the existence of an agent (someone who makes the boat sink and perceives the insurance). Our results provide evidence for this implicit argument in Broca’s aphasia: in this way we account for the fact that the performance of our patients is the same for (2a) and (2b).