Through the publication of four papers on archaeomagnetism by researchers at the UAB Department of Geology, this subject has been consolidated as a research line within the Faculty of Sciences. But, what actually is archaeomagnetism?

Archaeomagnetism is one of branches of archaeometry and it consists in applying the principles of palaeomagnetism to archaeology. Palaeomagnetism and archaeomagnetism are both applications related to the ability of certain materials to record magnetic data, similar to the old-fashioned cassette tapes. These tapes recorded magnetic data that could be turned into sound, and this storage was achieved by using a magnetic head that could write data on a surface made of iron oxide particles. Some rocks and archaeological materials also contain iron oxide particles and therefore can record data.

To record the Earth’s magnetic field in a material would not have any interest if that field were constant. At human scale we could think that the field does not change; for instance a magnetic compass always points towards the same north. Nevertheless, at geological scale strong variations have occurred, even polarity inversions (the last one 0.78 million years ago). Magnetostratigraphic scales describe these variations and are used as tools to date geologic formations. At secular scale, even at a ten-year scale, there are also small variations that can be used to date archaeological remains (especially kiln walls).

Figure 1. Archaeomagnetic sampling operations on one the kilns at El Vila-sec (Tarragona).


The archaeomagnetic dating of an archaeological site requires the previous knowledge of the magnetic field variations within the site area. These variations can be known by reading the magnetic signal recorded in nearby sites of known age. These already dated sites furnish data to build accurate archaeomagnetic field models. To date Catalan sites two tools are available: the secular variation curve (SVC) for Iberia and the regional model SCHA.DIF.3K. The archaeological study performed, in collaboration with archaeologists from the ICAC, at the Roman site of El Vila-sec (near Tarragona) allowed us to accurately date the site by using the typology of the pottery produced on the site and to prove that both the Iberian SVC and the regional model are reliable to date Roman sites in Catalonia. We later applied the same strategy to other five Roman sites in Catalonia, two of them lacking of pottery remains and therefore, not easily datable using other techniques.

Figure 2. Sampling at El Vila-sec (Tarragona) just before the site was reburied by a new roadway.


Besides Catalonia, we were also interested in north-African sites, specifically from Tunisia. Through a collaboration between the UAB and researchers at the University of Tunisia, three Punic and four Roman sites from Tunisia were analyzed. The work in Tunisia on the one hand contributes in providing analytical data which can validate chronological hypotheses suggested by the archaeologists and on the other hand offers new archaeomagnetic data which can be used to develop archaeomagnetic dating tools in an area where these types of studies were almost inexistent. All this should contribute to promoting Tunisia’s archaeological heritage and to train experts who could continue developing archaeomagnetism in their country. 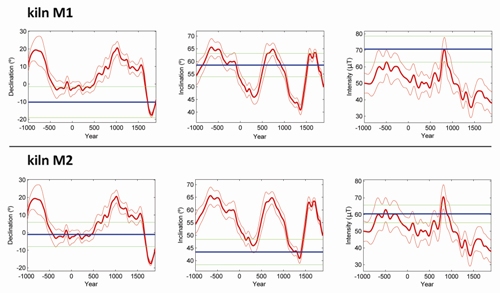 Figure 3. Experimental archaeomagnetic vector components (declination, inclination and intensity) values (blue) with indication of their standard deviation (green) for kilns M1 and M2 at El Maklouba (Tunisia). The archaeomagnetic field evolution at the site predicted by the SCHA.DIF.3K model is depicted in red. 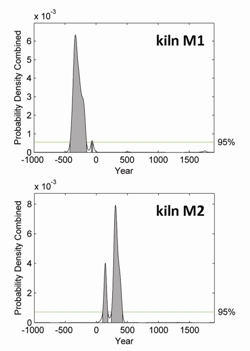