An exceptional fossil shows when squirrels conquered the sky

That morning of summer 2008 there was a considerable stir at the ICP (Catalan Institute of Paleontology Miquel Crusafont). A new primate fossil had just been found at the Can Mata landfill! The Can Mata landfill (Abocador de Can Mata), at the town of els Hostalets de Pirola (l’Anoia, Barcelona), comprises hundreds of very rich sites dating back to the Miocene. In 2002 excavation works to expand the landfill started, and ever since then paleontologists have been watching out the digging machinery, allowing for the recovery of tens of thousands of fossils. These represent a diverse vertebrate fauna that includes mastodons, sabertooth carnivores, and of course, primates. The remains of several ape species have made this place world famous. The fossil we were just looking at was an almost complete skeleton with long and delicate limbs which was outstanding because of its size, if it belonged to a primate, that was a tiny one. However, fossil preparation revealed more bones that clearly showed that the skeleton was not a primate. Much to the disappointment of in-house paleoanthropologists, it was a rodent of the species Miopeaturista neogrivensis, a purported flying squirrel. Yet, this finding was perhaps even more exceptional than a primate. 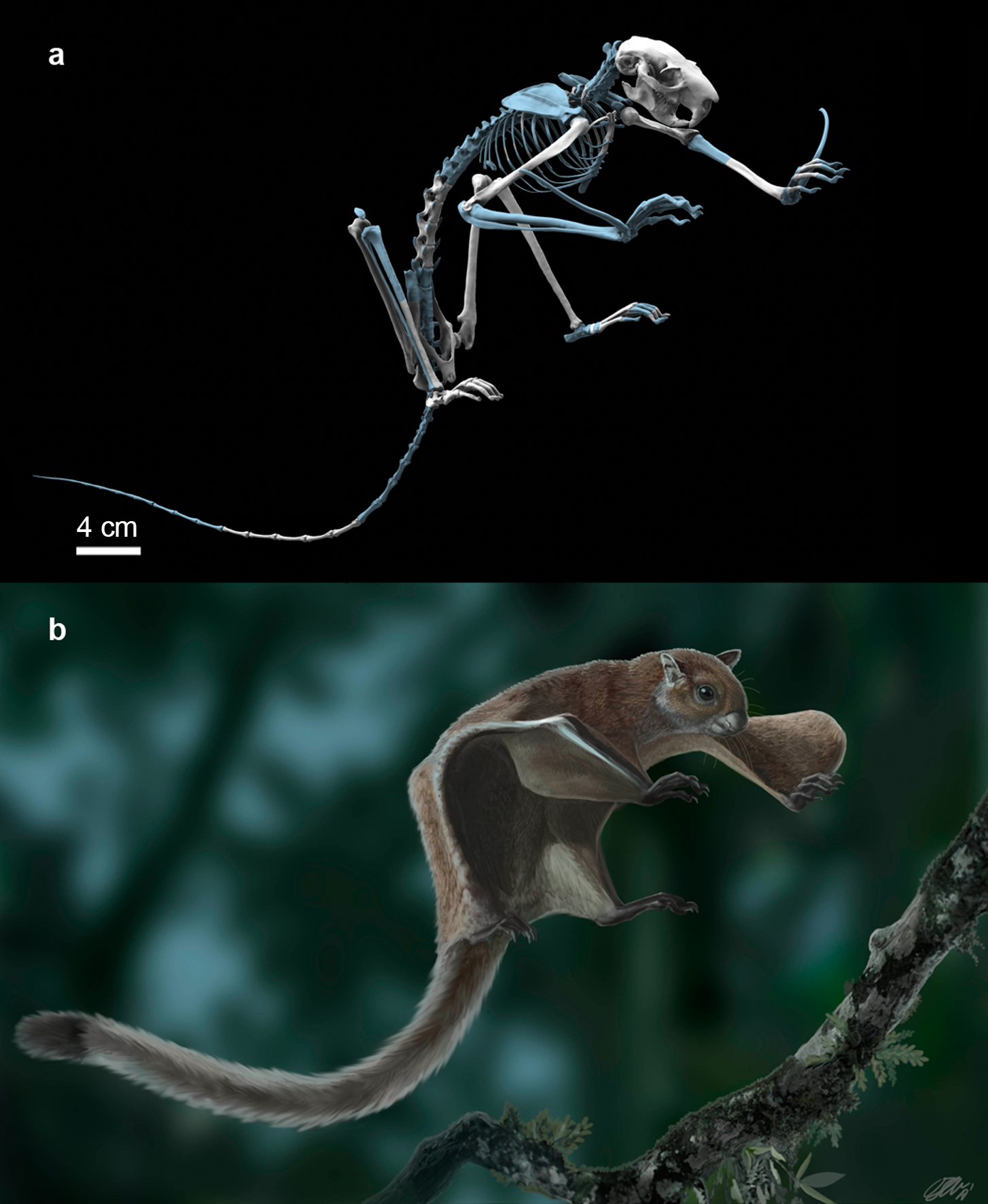 Thousands of extinct rodent species are known, including tens of flying squirrels, but for most of them only isolated cheek teeth and occasionally mandible fragments have been found. Miopetaurista had been considered a flying squirrel because its cheek teeth resemble those of extant flying squirrels, but unfortunately teeth are useless to infer how an animal moved. Indeed, these are almost identical to the teeth of some tree squirrels, so some researchers had questioned that Miopetaurista and other extinct species were indeed flying squirrels. This had triggered a debate on the origins of this group. While most genetic studies concluded that these gliding rodents had evolved 23 million years ago, the oldest remains, isolated cheek teeth, dated back to 36 million years ago. The Can Mata skeleton, with an age of 11.6 million years, is the only one ever found of a purported flying squirrel. Hence, it is key to help solving this disagreement.

Flying squirrels do not fly like bats, they have a skin membrane, called patagium, running between front and hind limbs that can be extended for glide when they jump from tree to tree. Other mammals, such as flying lemurs or sugar gliders, have also evolved this kind of locomotion, but only flying squirrels have achieved a considerable diversity (52 species) and broad distribution (all across the northern hemisphere). Specialized bones of the squirrel wrist are used to support and extend the patagium. In order to recover these minute bones all the sediment attached to the fossil skeleton was screen-washed. Their unmistakable anatomy showed that effectively Miopetaurista did glide. The huge number of recovered elements allowed building a tridimensional model of the skeleton using computed tomography scans and multiple photographs. Weighting almost 2 kilograms and with a wingspan of 40 centimeters, Miopetaurista was a very large squirrel. We have also performed new evolutionary analyses combining genetic and paleontological data which conclude that flying squirrels evolved from arboreal squirrels as far back as 31 to 25 million years ago, if not earlier. Nevertheless, transitional forms between both kinds of squirrels are yet to be found. These analyses also show that Miopetaurista is closely related to Petaurista, the extant giant flying squirrels of southeastern Asia, to the point that these should be considered ‘living fossils’. 12 million years ago, while our ancestors climbed the trees at els Hostalets de Pierola, flying squirrels already looked like their extant relatives. If they have been so long without changing, they must be doing something right!