African Dust in Tenerife and Montseny

Deposition fluxes from the atmosphere contribute significantly to ecosystems by providing elements of biogeochemical relevance, such as nitrogen (N), calcium (Ca), magnesium (Mg), potassium (K), phosphorus (P) and iron (Fe). The amount and characteristics of atmospheric deposition will depend on the pollutant load of the local atmosphere, meteorology, and the transport patterns from the emission sources to receptor sites. Previous studies in the Mediterranean have shown the existence of a latitudinal gradient with respect to Africa that affects the levels of atmospheric particles. This fact motivates the present study, where we compare wet and dry deposition at two sites located at different distances to the African continent: (1) Santa Cruz de Tenerife in the Canary Islands (SCO) and (2) Montseny (MSY) in the Northeast of the Iberian Peninsula.

The starting hypothesis is that coarse particles (PM10) and soluble elements derived from African dust (Ca, K, and Mg) will have higher deposition rates in the locality near the African continent than in the more distant one. On the other hand, the elements derived from industrial and urban emissions (nitrate, sulfate and ammonium) will have greater deposition in the peninsular locality due to local contamination and long-distance transport of contaminated air masses from industrial areas in the European continent.

Wet deposition is the process by which gases and aerosols are deposited on terrestrial surfaces after being incorporated into rain, snow or fog, and is normally measured with rain gauge-like collectors. Dry deposition is produced by turbulent and Brownian transfer of gases and fine particles to the the surfaces and by the gravitational sedimentation of coarse particles (diameter> 2.5 μm). There are different methods of measuring dry deposition. In arid and semi-arid regions subject to high dust deposition, the collection of the dryfall flux on buckets or funnels has been considered adequate because of the predominantly coarse nature of the particles, which tend to settle by gravity. Consequently, this is the method that we will use in this work. Total deposition results from the sum of dry plus wet deposition. 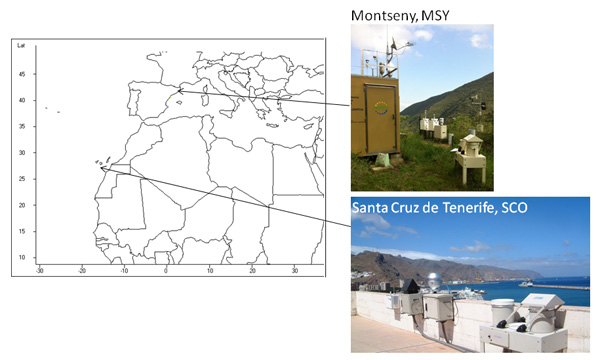 Fig. 1. Map of the study sites in Montseny (MSY) and Santa Cruz de Tenerife (Canary Islands, SCO) and photos of the instrumentation at the sites. In the forefront of both photos, the wet/dry deposition collector is shown.

The results show that total deposition of insoluble particles (PM10) was about 3 times higher near the African coast than in Montseny (17 vs. 5 g m-2 y-1). On the contrary, for the soluble fraction, meteorology had a more important role than distance. Thus, total deposition of soluble Ca, Mg and K (crustal elements from desert dust) was related to the amount of precipitation, which was much higher in Montseny than in Santa Cruz de Tenerife (998 v. 134 mm). Therefore, in the distant locality, elements from African dust were mostly delivered as wet deposition, while close to Africa dry deposition predominated.

For anthropogenic derived elements, it is worth noticing the very low nitrate and ammonium deposition values in the Canary Islands, both in wet and dry deposition, suggesting that trade winds from the northeast carry away local sulfur dioxide, nitrogen dioxide and ammonia emissions and that little pollution of these compounds is acquired from North Africa. On the other hand, as we hypothesized, deposition of nitrate, sulfate and ammonium in Montseny was higher than at Santa Cruz, and was mainly due to wet deposition. When analyzing deposition according to the origin of the air masses, we found that the North African share in deposition increased with distance. This suggests that mineral dust may act as a surface of pollutant reaction, being coated with ammonium, sulphate and nitrate ions as the dust plume travels from North Africa to the Western Mediterranean reacting with pollutants encountered during this trajectory. A similar behaviour has been described in cases of mineral dust intrusions that travel through contaminated regions in East Asia. Thus, African dust can provide a mechanism for purifying pollution. Our results indicate that this removal is most effective in the wet mode and at locations farthest from the mineral source.