On the Use of "That" by Individuals with Afasia

In this article we consider the production of 100 individuals with different profiles of aphasia and 100 individuals without brain damage, from the corpus AphasiaBank (http://talkbank.org/APhasiaBank/), in order to establish the useof thatin certain embedded constructions in English where its presence is optional (He said that he would come / He said ø he would come).

Through the analysis of induced spontaneous language production, a clear decrease in the presence of subordinate clauses has been established in the group of individuals with aphasia in comparison to the group without brain damage. This trend is more pronounced in the case of non-fluent aphasia, of which the most representative member is Broca's aphasia. However, despite these asymmetries in the total number, the strategy of subordinate clause formation as regards the presence or absence of that is the same across the various groups, as indicated in the chart below. 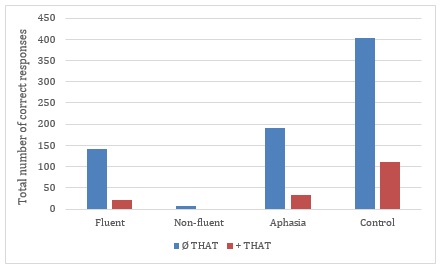 Figure: Strategy of subordinate clause formation as regards the presence or absence of that.

First,these findings show that, in individuals with aphasia, syntactic complexity reduction operates not only in the group of non-fluent aphasia, but also in the group of subjects with fluent aphasia (in line with Edwards, 2005; Bastiaanse, 2011; among others).  Furthermore, based on these results, and following Franks(2005) and Llinàs-Grau & Fernández-Sánchez (2013), the high percentage of sentences without that in all groups suggests that subordinate clauses selected by bridge verbs like say/know/think could be examples of structures reduced to Tense Phrase (TP) in colloquial style.