The Magic Telescopes opened an unexplored window on the cosmic radiation

The Earth is permanently exposed to a flux of Cosmic Rays (CRs) coming from outer space. Some particles have energies that correspond to the energy of a tennis ball with a 90 km/h velocity concentrated in a single atom! These energies are beyond any possible present and future reach of particle acceleration experiments on Earth. Despite the investigation traces back to the first half of last century, still a clear picture on how and where CRs are accelerated at all energies cannot be drawn.

MAGIC belongs to the class of Imaging Atmospheric Cherenkov telescopes (IACTs) that detect the light emitted by the charged particles that are created by cosmic gamma-rays when impinging onto the top Earth atmosphere. Although its origin goes back to only few decades ago, ground-based cosmic gamma-ray astronomy has already demonstrated to be a mature scientific technique in probing non-thermal phenomena in the universe.

CRs of non-thermal origin can be accelerated either directly at the place of origin, for example nearby the surface of a fast rotating pulsar, or may gain energy on cosmological time-scales through interaction with irregular cosmic magnetic fields or shock wave fronts. In some cases, the combined power emitted at these energies exceeds the total power emitted at other wavelengths, and therefore this kind of astrophysics has attained large attention over the last years.

The design of MAGIC-I comes from a solar light concentration prototype built in Germany and modified to fit the IACT demands. Several design solutions were driven by two goals: (i) to reach the lowest energy threshold and (ii) to have the fastest reaction to Gamma-Ray Bursts satellite alerts from the Gamma-ray Coordinates Network. The former goal was achieved by building a 17 m diameter mirror dish, the worldwide largest one used in IACTs at that time. For the latter goal, the structure was kept as light as possible by using a light-weight carbon fibre reinforced plastic tubes solution for the structure and dish, with increased stiffness and much lighter weight than the typical steel solution. This result in 64 tons total moving weight that allow for fast repositioning of the telescope in about 20s. 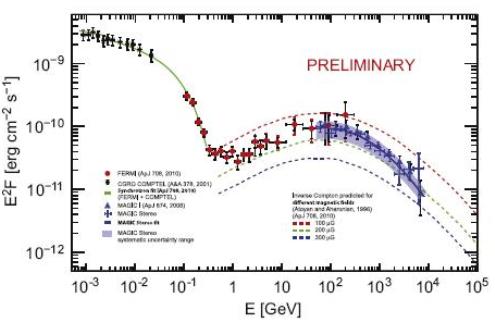 Graphic: Spectral energy distribution of the Crab Nebula obtained with the MAGIC telescopes, together with the results from previous gamma-ray experiments.

The current generation of IACTs has still failed in answering some of the fundamental questions that motivate gamma-ray astronomy: What is the acceleration mechanism of cosmic rays? How are the gamma rays produced? These questions may be answered by looking at the lowest possible energies for this technique. Therefore, MAGIC findings are intimately related to its capability to observe in this regime, in which MAGIC has been the only eye from the Earth looking at the Universe for almost a decade now.

The standard candle in gamma-ray astronomy is a Supernova Remnant called the Crab Nebula, whose progenitor star exploded as a supernova in 1054, almost one thousand years ago. MAGIC characteristics allowed to precisely estimate the magnetic field responsible for the acceleration of CRs in the nebula. At the centre of the Crab Nebula, a fast rotating pulsar lives and powers a strong radiating wind. For the first time in history, MAGIC saw pulsed very-high-energy gamma-ray emission from the Crab pulsar. At the time of discovery, this result already excluded several of the most discussed pulsar models.

The low energy threshold also helped us make important discoveries for extragalactic targets, like active galactic nuclei, which feature tremendously strong jets of radiations and particles emitting from their central super-massive black holes and spreading in the space for thousands of light years. The MAGIC telescope discovered gamma-ray emission coming from the galaxy PKS1222+21. It is the second most distant gamma-ray source with well-measured redshift, ever detected. The observation was performed in June 2010 using the MAGIC stereo system during half an hour. The energy flux measured by MAGIC varied significantly during these 30 minutes of exposure implying a flux doubling time of about 10 minutes. The absence of a spectral cutoff constrained the gamma-ray emission region to lie outside the broad line region, which would otherwise absorb the gamma-rays. Together with the detected fast variability, this heavily challenges present emission models from jets in the distant galaxy.

Spanish institutes contributed with about 50 scientists and played a major role in the construction of MAGIC and its scientific exploration. The Unitat de Física de les Radiacions of the Department of Physics of the UAB participated in MAGIC since the end of 1998, with Carmen Baixeras being the responsible first and Lluís Font Guiteras since 2009. The group conducted the atmospheric monitoring, and is currently coordinating the atmospheric calibration. Also coordinated the dark matter search program in MAGIC, and has experts in galactic objects and Gamma-Ray Bursts physics. The UAB Campus also hosts two other relevant institutions involved in MAGIC: the Institut de Física d’Altes Energies (IFAE) and the Instituto de Ciencias del Espacio (IEEC-CSIC). The MAGIC collaboration has published already more than 80 papers in journals as prestigious as Science (4 papers), Astrophysical Journal Letters and Astronomy & Astrophysics.