Casa Convalescència, one of the last great works of Catalan Art Nouveau, forms part of the complex of the Hospital de la Santa Creu i Sant Pau. The complex was designed in the late 19th century to alleviate the shortage of hospital space in Barcelona.

The hospital of Santa Creu, dating from 1401 and situated in the old city centre (Casc Antic) had become obsolete due the city's growth and breakthroughs in medicine. The construction of the Casa was supervised by Pere Domènech i Roura. Initially he worked with his father, Lluís Domènech i Montaner, and then took over as supervisor after the latter’s death in 1923.

The building, which was used for convalescent patients, with a maximum capacity for 100 residents, featured stunning glazed solariums and a chapel, which split the building into two wings, one for men and one for women. The Casa was independent of the Hospital, having its own kitchen and pharmacy, as well as its own financial management. 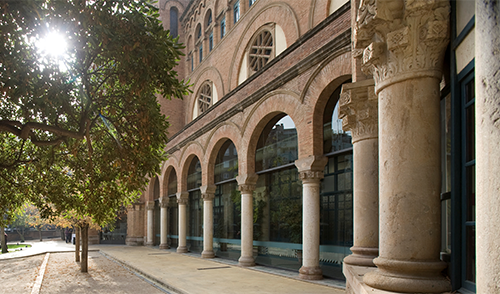