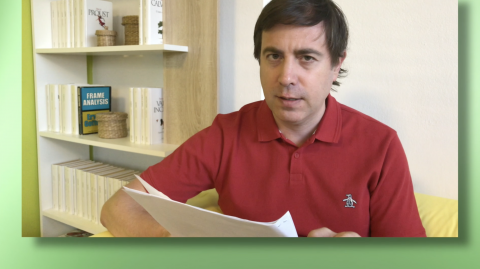 Ezequiel Ramon is a professor at the Faculty of Communication Studies in the UAB. He teaches Communication Theories, among others subjects, and supervises Bachelor degree projects. He is interested in the role of journalism in modern society, new journalistic formats against traditional ones, and in the development of new narratives articulated using new technologies. His research topics are Social Media, Journalism, Housing right, and citizenry mobilization.

During the past century, new practices of journalistic styles in the press had arisen, at the same time that the role of media in the society was reconfigured. This subject analyses the course of journalism through its various genres, interviews, chronicles, and reports.

By reading prominent texts and watching audiovisual content, the aim will be to understand the structure that articulates them. What were the intentions of those who conceived them? Which effects do they have on the audiences? We will also work with resources that can be used in order to optimize communication un a more effective.

We will also explore the new digital narratives evolution, from an analytical and descriptive perspective, avoiding normative parameters and catalogs. A social perspective will be considered too. What do we talk about when referring to 'quality journalism'? What is its contribution to a critical democratic society?

Students are expected, after the course, to be able to identify the different genres, their main features, and to understand what strategies the authors have used and which effects they sought to provoke in the audience.

*Students are encouraged to read them in their own mother tongue, although the working language is going to be english.

Daily evaluation: following the professor explanation, journalistic articles (interviews, chronicles or reports) will be given to groups of three students in relation to the topic. After that, a general discussion will take place within the full class.

The evaluation will be: 65% daily comments on readings; 20% case exposition (in groups); 15% class participation.